Inflows into EM and Russian securities resume after Christmas sell-off 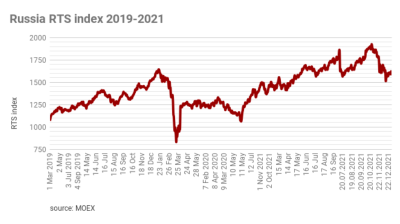 After selling off sharply in the last two months of 2021 on rising geopolitical tensions, Russian and EM funds saw inflows resume in the first week of 2022. / bne IntelliNews
By bne IntelliNews January 7, 2022

Funds flows reversed and began flowing back into Russia’s securities following a sharp sell-off in the last two months of 2021 on the back of rapidly rising geopolitical tensions.

Fund flow tracker EPFR Global reported that Russian assets saw a net inflow of c$80mn in the week ending on January 6, ending the outflows of the last two months.

Russia’s dollar-denominated Russia Trading System (RTS) index peaked at 1920 in October, but then fell heavily, giving up almost half of all the gains it made over the course of 2021.

The RTS has lain moribund since the 2014 sanctions were imposed following Russia’s annexation of Crimea and the oil price shock of that year, trapped in a trading band of between 900 and 1300. It broke out in 2018 as individual names began to recover. By 2019 there was a broad-based rally that began to lift the index as a whole. The rally was put on hold during 2020 following yet another oil price shock and the start of the coronavirus (COVID-19) pandemic, but resumed in the third quarter once the vaccines appeared.

Russia was one of the world’s best performing markets in 2021 with the RTS up by a third, until the end of October when the US started reporting on a build-up of Russian forces on Ukraine’s border and Russian President Vladimir Putin demanded talks with the US and Nato on a new security deal, backed by the threat of “military and technical” action by Russia if his demands were not met. That lead to a sharp sell-off that saw the RTS index fall to just under 1600 by the end of the year.

US President Joe Biden has conceded starting talks with the Kremlin, which will commence next week on January 10 and go on for four days, as they also include sessions with the leading EU countries and the top military brass at Nato.

Prospects for a deal remain mixed, but there is some common ground, as both Biden and Putin want to restart some of the Cold War-era missile treaties. However, Putin’s insistence on legal guarantees of no further expansion of the Nato alliance will be a major sticking point.

Aside from the tense politics, Russia’s economy looks strong and companies have been earning record profits in 2021 that they are sharing with investors, with record dividend payments that will continue in 2022. Based on the economics, analysts marked Russia up to a Buy at the end of 2021 with an end of target of 2000 for the RTS – provided there are no setbacks with Ukraine military action or a renewal of the pandemic with yet another variant virus.

EPFR Global reported inflows from combined equity and bond fund flows in the reporting week ending January 6 versus c$50mn of outflows during the previous one – the best inflows since early November, when the Ukraine border military build-up was first reported.

Russia-dedicated funds saw outflows fall to c$20mn in the week against c$40mn of outflows in the previous week. Dedicated Russian equity funds have seen outflows in six of the last seven weeks, according to EPFR.

Combined Russia and EM funds saw inflows of c$50mn, on a par with the previous week’s c$60mn of inflows, when inflows resumed.

Flows into Russian-dedicated bond funds were flat on the week, while combined EM bond flows were up c$30mn in versus c$15mn outflows in the previous week – the first inflows since early September last year.

“Russia made a solid start to 2022. The Kazakhstan impact is limited so far. As in the previous week, inflows into GEM equity funds made the overall fund flow picture for Russian stocks positive. This fund category reported $1.2bn of new investor cash put to work, [the] second consecutive week of inflows and two best back-to-back weeks since June,” Slava Smolyaninov, head of strategy at BSC GM, said in a note. “Russia-dedicated funds had another negative week, but outflows were [a] relatively minor $22mn.”

Elsewhere, the fund flow picture was mostly positive, with China funds reporting net inflows of $2.3bn, the dominant force. In general, Russian flows do well when China does badly, and vice versa.

“During the slow times of early 2022, global investors appear more positive on EM stocks, which should support the Russian stock market in the coming weeks,” Smolyaninov adds. “The Kazakhstan riots are [a] true regional black swan and a point to watch for investment community in the near term, with admittedly very low visibility in terms of investment implications. Yet we doubt they would lead to major outflows from EMEA, Eastern Europe or Russia equity funds unless seriously escalating.”

Net flows for the Russian bond funds were muted, as the country is on long New Year and Christmas holidays. While EM bond spreads have seriously narrowed in the past couple of weeks, the pressure from the UST yield curve remains, BCS GM reports.

“Both GEM equity and bond funds suggest renewed global investor interest in the asset class at the beginning of the year, which is positive. Russia-dedicated flows are suppressed by the low season, while Kazakhstan developments have limited impact on regional fund flows so far,” Smolyaninov said.