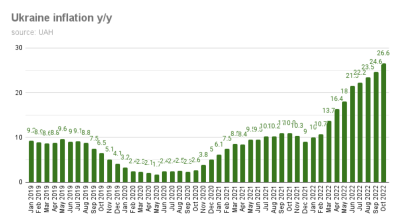 Inflation in Ukraine is up again to 26.6% y/y in October despite 25% prime rate. Printing money remains the main source of budget funding that is fuelling inflation. / bne IntelliNews
By Dominic Culverwell in Oxford November 11, 2022

Inflation in Ukraine increased by 2.5% in October 2022 compared to September and by 26.6% year on year, Economic Pravda reported on November 10. (chart)

On the consumer market, the biggest increase was seen in food and non-alcoholic beverages, which rose by 4.2% compared to September, according to data from the State Statistics Service. Eggs rose in price the most, by 60.5%. Prices for lard, vegetables, fruits, meat and meat products, non-alcoholic beverages, fish and fish products, cheese, butter and milk climbed by 2.3-11.3%.

Prices for alcoholic beverages increased by 0.8% and tobacco products went up by 0.9%. However, grain-processing products fell in price by 4.8%. Clothing increased by 1.7% and footwear by 2.1%. In the health care sector, prices firmed by 1.2%, with hospital services increasing by 1.8% and outpatient services by 1.6%.

Transport prices went up by 0.8%, mainly due to a 1.5% rise in the price of vehicles. At the same time, fares in railway passenger transport became cheaper by 5.1%, the State Statistics Service said.

The National Bank of Ukraine (NBU) noted that inflation has been “marginally lower than expected” and business activity was slightly higher. The bank believes that inflation will reach around 30% this year, but should slow in the next few years provided that security risks subside as expected and monetary and fiscal policies are well co-ordinated. Inflation could drop to 20.8% next year and to below 10% in 2024. However, high energy prices will stifle a faster decrease.