Industry lags behind most other sectors of the economy in Romania 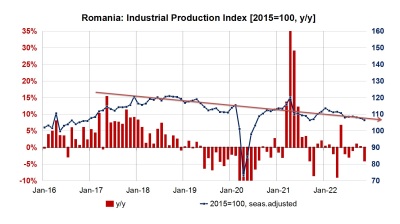 Romania’s industry continued to contract in 2022 for the fourth year running, based on the gross industrial production in January-November, reported by the statistics office INS.

While the pandemic year 2020 and the war in Ukraine made visible impacts on Romania’s industry, the downward trend is the result of low value-added activities outsourced by foreign industrial groups, correlated with the lowest degree of innovation in Europe featured by the local enterprises.

Even so, the (modest) productivity growth resulted in a 1.9% advance of the value added generated by the industry in January-September 2022 compared to the same period in 2018, when the industrial decline began in Romania. Over the same four-year period, the gross industrial production contracted by 5.2%. The differential indicates an average productivity gain of 7% over a four-year period.

The country’s GDP surged by nearly 11% over the same four-year period, nearly six times faster than industry. The IT&C sector’s value-added soared by 67% and even traditional sectors such as agriculture and construction advanced by around 15% over the period when industry was edging up by 1.9%.

In January-November, the gross industrial output decreased by 1.1% y/y, according to INS.

The manufacturing industries posted a modest but positive 0.3% y/y advance on average, while utilities (supply of electricity, gas and heating) plunged by -8.8% y/y to reflect lower consumption and the sector of mining and quarrying lost momentum (-2.9% y/y) amid the steady depletion of oil and gas deposits (a situation that improved after extraction began at the Midia offshore perimeter).

The developments in the energy market, which impacted the utility sector, also hurt specific manufacturing industries such as chemistry (-22% y/y) and metallurgy (-13% y/y). Wood processing and furniture industries also posted negative performances possibly driven by the rising price of wood.

The industry of “motor vehicles, trailers and semi-trailers” posted a negative performance (-0.1% y/y), but this remains puzzling as the automobile producers reported robust double-digit growth rates for the number of cars produced.

When it comes to the medium-term perspective, light industries are responsible for a large part of the 6.6% industrial contraction in January-November 2022 compared to the same period in 2018.

In fact, this may explain also part of the productivity gain recorded by Romania’s industry on average: the light industries were particularly low value-added and the simple change in the industrial structure resulted in higher average productivity.