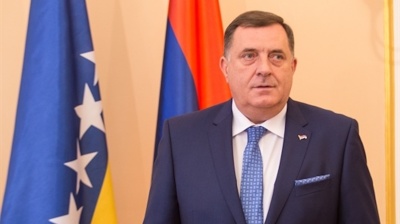 The politically divided country voted last month in the eighth general election since the end of the 1992-1995 war, picking the members of the state-level tripartite presidency, the state parliament and the assemblies in the two entities — the Muslim-Croat Federation and Republika Srpska — as well as for the parliament in the autonomous Brcko District and the presidency of Republika Srpska.

The three members of the rotating presidency represent the three main ethnic groups in Bosnia and each of them chairs the institution in turn.

Dodik, who has many times stated that his entity, Republika Srpska, does not belong to Bosnia, once again showed his secession aspirations, choosing to swear in as state-level president in the entity’s parliament in the presence of Serbia’s President Aleksandar Vucic, though he also called on the EU to grant the country candidate status.

In his inaugural speech Dodik once again attacked the current establishment of Bosnia, claiming that the High Representative has way more authority than the Dayton peace agreement gave him initially.

“This Bosnia & Herzegovina, which has significantly distanced itself from the Dayton accord and its most important annex — the Constitution of BiH — is not going on a good path. This is not a going back but this is the way of factual disappearance and cessation,” Dodik said.

While heading Republika Srpska’s presidency, Dodik has many times said that Bosnia is not his country and aspires to align with Serbia and Russia. Analysts have warned that after being elected to the state-level presidency he could further escalate the political tensions in the already unstable country, preventing its advancement towards EU and Nato membership.

The Bosniak and Croat presidency members, Sefik Dzaferovic and Zeljko Komsic, are both willing to see the country in the EU. Unlike Dodik, they also favour the country’s Nato membership, while he has insisted that Bosnia will be a militarily neutral country.

Moreover, Dodik, who is under US sanctions due to his secessionist ideas, is supported by Russia’s President Vladimir Putin and analysts speculate that Putin might use him to spark a new conflict in the Balkans to divert attention from his own politics.

In April Michael Carpenter, the former US deputy assistant secretary of defence for Russia, Eastern Europe and the Balkans who is now senior director for diplomacy and global engagement at the University of Pennsylvania's Penn Biden Center, said that Russia could use Dodik to ignite a new conflict in Bosnia and use it to destabilise the region if Europe decides to impose more sanctions against Russia.

A report released in March by the Foreign Policy Research Institute (FPRI) claimed that Moscow was helping the Serb-dominated entity in its efforts at militarisation, aiming to divide the country. That report claimed that Dodik is arming and equipping the Republika Srpska police and related security forces with military-grade weaponry and training them with the assistance of Russia, aiming to secure the future separation of the entity from Bosnia.

TURKEY INSIGHT: Follow the (hot) money
18 hours ago
Lukashenko isolated himself from the rest of the world with a secret inauguration
20 hours ago
Iran’s oil minister openly admits forging export documents to dodge US sanctions
21 hours ago
“Putin’s chef” follows through on threat to bankrupt Navalny, bailiffs seize his apartment
1 day ago
Romania at high risk of downgrade to junk
1 day ago