Hungary takes unprecedented measures to fight the spread of coronavirus 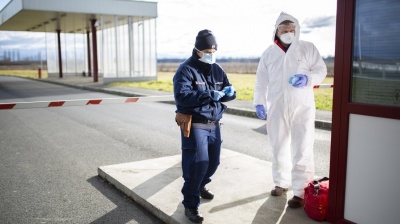 Hungary to introduce border control on Schengen borders with Slovenia and Austria from midnight on March 11.
By Tamas Szilagyi in Budapest March 11, 2020

Hungary's government declared a state of emergency on March 11 as part of its response to the new coronavirus, it was announced on Wednesday. This will entail travel bans, border controls, the closure of cinemas and theatres, and the cancellation of public events until further notice.

It is the first time that a state of national crisis has been declared. During floods, it had been imposed only in certain regions.

Travellers from Italy, Iran, China and South Korea will be banned from entering the country, while Hungarian citizens who come from those countries will be required to stay in quarantine at their homes for two weeks, cabinet chief Gergely Gulyas announced at an extraordinary press conference.

The government approved the recommendation of the Operational Group, the board responsible for coordinating the response to the new coronavirus outbreak. A few days ago the cabinet cancelled all state commemorations for the March 15 national holiday.

The unprecedented measures come a week after Covid-19 was first detected in two Iranian students in Hungary. In the last seven days, 11 more people were diagnosed with the virus and there are 69 people in quarantine at the South Pest Central Hospital. The 13 coronavirus cases in the country include eight Iranians, one Brit, and four Hungarians.

The number of cases remains relatively low compared to countries in the region even though Hungary is a major transit hub. Critics say that testing has been inadequate. So far only 600 tests have been carried out.

Gulyas said that controls will be introduced on Hungary's Schengen borders with Slovenia and Austria from midnight. Full border control rules are planned to be introduced on the Hungary-Croatia border.

bne IntelliNews learned that the government is considering that option as well and that many companies are making preparations to allow staff to work from home if further restrictions are put in place.

All school trips abroad will be suspended, and the launch of subsidised foreign language courses abroad for secondary school students will be postponed by a year.

Gulyas warned that making false statements and violations of quarantine would be sanctioned. The export of all sanitary equipment, including medical masks and disinfectants will be banned. People who refuse to cooperate will be detained by the immigration police for six months

All the emergency measures will remain in force until recalled, Gulyas said, adding that this may take weeks or months.

Opposition parties have welcomed the government's decision, but some said the measures should have been introduced earlier.