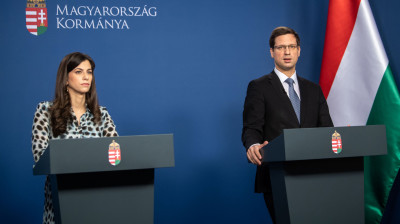 The Hungarian government on April 4 announced the launch of a HUF663bn (€1.8bn) fund to combat the novel coronavirus (COVID-19) epidemic in addition to a HUF1.3 trillion fund aimed at protecting and restarting the economy.

Prime Minister Viktor Orban is expected to announce a broader economic stimulus on Monday or Tuesday, termed as the largest ever economic stimulus in the history of the country, which could total HUF8 trillion-10 trillion in total, including measures announced on Saturday.

In comparison, Hungary's 2020 budget was drafted with a HUF21.4 trillion revenue target (€58.6bn) and expenditures of HUF21.8 trillion, producing a deficit of HUF367bn, or 1% of the GDP. The government is planning to overhaul the 2020 budget and let the deficit rise to 3%, but analysts say it could be forced to relax tight fiscal policies further to finance the recovery.

Cabinet chief minister Gergely Gulyas announced on Saturday that contributions to the epidemic response fund will come from the special tax levied on banks and multinational retailers, and by diverting vehicle tax from local governments. In value, this is HUF55bn, HUF36bn, and HUF34bn respectively. The government will also channel HUF378bn from the reserves to the fund.

Political parties will be compelled to chip in with HUF1.2bn each independent of their budgetary financing, which political analysts say will hurt smaller opposition parties. The HUF10bn contribution makes up only 0.5% of the HUF2 trillion fund.

The economic recovery fund will include HUF992bn diverted from ministry budgets and HUF423bn from the National Employment Fund.

Opposition parties condemned the funding cuts for local governments, which are at the forefront of coronavirus response efforts, at a time when they expect shortfalls in local business tax due to the slump in business activity and rising social welfare costs.

To make matters worse for them, Orban announced he will make parking free across the country in a decree issued on Sunday. Hungary's right-wing strongman is using his powers to tighten the grip on local governments by cutting off funding from them, analysts noted. The measure was specifically targeted at the liberal leadership of Budapest, which hesitated to make parking free.

In his regular Friday morning interview Orban also announced a one-time HUF500,000 bonus for all healthcare workers after calls by unions and opposition parties to raise wages. The leftist-liberal Dialogue party said instead of one-off payments, the cabinet should double wages immediately.

The Socialists proposed the government take over 75-80% of wage payments for business sector employees, introduce a moratorium on lay-offs and fix the prices of food and protective gear.

Green party LMP wants to suspend the large-scale museum quarter project in Budapest and the reconstruction of the Budapest-Belgrade railway line financed from Chinese capital.

Orban has repeatedly rejected calls to provide a basic income for people laid off and it remains to be seen whether the grand economic stimulus will include supplementing wages of employees.

Luca Visentini, general secretary of the European Trade Union Confederation (ETUC), has criticised the Hungarian government for relaxing the labour code to favour businesses. In a reply, the prime minister promised that his government will create as many jobs as are going to be lost due to the coronavirus epidemic

The government announced on Saturday it will slap extra taxes on banks and retailers to fund the coronavirus crisis fund. The move comes as no surprise given that foreign ownership in these sectors remain high and the conservative-nationalist government has plenty of experience in levying special taxes on multinational companies.

Consultancy firms warned just last week that banks and retailers could come under pressure again as the government is scrambling to find new sources of revenue to fill in the budget shortfalls.

The Orban government introduced windfall taxes for retailers, energy and finance firms to meet the deficit targets after its first landslide victory in 2010. The Court of Justice of the European Union (CJEU) last month ruled that progressive, turnover-based taxes on retailers and telcos in Hungary were compatible with European Union rules.

After the ruling, the emboldened finance ministry said that large companies will not be able to object in the future to paying proportionally more taxes than small businesses with significantly lower economic potential.

No details emerged on the base of the tax for retailers, but the government is targeting HUF36bn in revenue, which is dwarfed in comparison to the entire size of the rescue funds. Analysts said the government is sending a message to these firms.

The 11 largest retail chains in Hungary had a total gross turnover of HUF4.6tn last year. Tesco is the largest player on the market with sales revenue of HUF622bn. The special tax could have an impact on future investment and wage policies of retailers, local media commented.

Hungarian banks will be slapped with HUF55bn and OTP, as the largest lender in Hungary, is expected to pay the largest chunk of that. The levy on banks comes as no surprise in light of the sector’s record profit of close to HUF700bn and following recommendations by the Hungarian Chamber of Commerce and Industry (MKIK) to set up a crisis fund from one-off payments by multinationals.

OTP accounted for 60% of the sector’s net earnings with a consolidated profit of HUF413bn, half of which came from foreign units. The bank's total assets of HUF20.2 trillion at the end of 2019 was 40% of the sector total HUF49.8 trillion. Excluding foreign units, OTP’s share was 20.5%.

Local media calculates that OTP is expected to pay between HUF11bn-33bn depending on various scenarios. The tax could be levied on total assets or profit, including or excluding foreign-units of OTP .

The impact on the bank’s earnings would be in the range of HUF10bn-30bn, or HUF37-106 per share, analysts estimated.

In a poll by Reuters, the median forecast for OTP's 2020 earnings was HUF410bn with one analyst projecting HUF272bn in profit. OTP could pay some 10% of its earnings in a worst-case scenario.