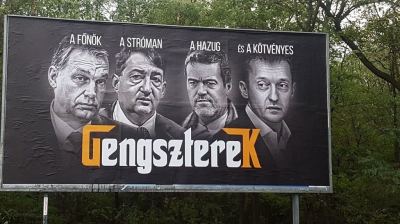 Hungary's extreme rightwing Jobbik party has threatened to pull out of next year's general election after it was faced with a HUF660mn fine for alleged illegal party financing. The radical nationalist Jobbik party’s participation has become “doubtful”, group leader Jaanos Volner told a press conference on December 6.

The State Audit Office (ASZ) has accused Jobbik of accepting over HUF330mn (€1.05m) in illegal financing, which makes it liable for a HUF660mn fine, which would wipe out its warchest for election campaigning.

Jobbik, which has become the biggest threat to strongman premier Viktor Orban's hopes of a third consecutive term, has launched a huge publicity campaign depicting the prime minister and his closest ministers and businessmen as mafia gangsters, using billboards allegedly provided cheaply by their main backer, Lajos Simicska, a former Fidesz treasurer turned tycoon, who broke with Orban in 2015.

The campaign has reportedly enraged Orban and the government has moved to crush it. President Janos Ader has signed into law a bill on billboards designed to restrict political advertising outside of official campaign periods. The legislation also stipulates that state-funded bodies and legal entities such as political parties can only rent space on billboards at pre-set prices. Simicska responded to this law by "selling" some 1,100 advertising spaces to Jobbik.

The premier and Fidesz officials on numerous occasions referred to Jobbik as the party bought up by Simicska. His media empire has gradually turned critical against the government and in the last year or so he has reportedly been actively helping Jobbik with his billboard companies and media. The radical party since has toned down its far-right and anti-EU rhetoric and has been engaged in talks with leftist opposition parties in Parliament on possible forms of co-operation.

In October the ASZ, headed by a former Fidesz deputy, began an investigation into Jobbik regarding illegal party financing, which came after the party placed political advertisements on Lajos Simicska’s advertising surfaces at discount prices. The governing parties Fidesz declared that the arrangement amounted to a form of illegal party financing. The county government offices began to remove posters of the party.

“Jobbik has accepted no questionable funding from organisations or private individuals, caucus leader Janos Volner said.  “What happened today equals to the first steps of banning and clearing away Jobbik by the State Audit Office, “which is now headed by a former Fidesz lawmaker”, he said.

Opposition parties and political scientists have spoken out against the ASZ finding. They say the government of using state institutions and authorities for party political purposes.