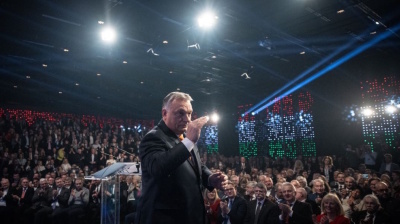 Hungarian Prime Minister Viktor Orban kicked off the official start of the election campaign with a state of nation speech on February 12 in Budapest.
By bne IntelliNews February 14, 2022

Hungary's ruling Fidesz party has launched its election campaign with an annual state of the nation speech by Prime Minister Viktor Orban after a one-year hiatus due to the pandemic.

Hungary’s illiberal strongman warned his supporters that former prime ministers Ferenc Gyurcsany and his successor for a one-year period, technocrat Gordon Bajnai were planning a comeback.

"The Gyurcsany-Bajnai governments had done the opposite to the current government in a crisis, abolishing the 13-month pension and home-building schemes, as well as the family tax credit, among others, while introducing a fee for visiting the GP and hospitals," Orban said.

The government has used Gyurcsany as a scapegoat for Hungary’s economic problems during the 2008 global financial crisis as well as for his handling of the 2006 riots that erupted over a leaked speech, where he called for reforms while acknowledging that his government lied to people before the 2006 spring elections.

Bajnai has been spared by the media attacks in recent years, despite the fact that he was the acting prime minister when the socialist-liberal government terminated the 13th-month pensions.

Orban, seeking a fourth term, has spent billions of euros before the election to shore up support as polls show a dead heat with the opposition alliance just seven weeks before the crucial vote.

The Fidesz government has launched an unprecedented spending spree. Pensioners received an extra month of payment last week and families are getting refunded their entire tax payment made in 2020 capped at HUF800,000.

The government set a price cap on fuel, rolled back the price of a half dozen food staples to October levels, and variable-rate mortgage loans were also frozen.

After sweeping to power in 2010, Orban spoke highly of the crisis management led by Bajnai that helped consolidate Hungary’s finances after resorting to an IMF emergency loan during the crisis.

In his keynote speech, Orban depicted the opposition as a weak and unorganised group yet dangerous due to the support of foreign powers.

The border, he said, would only be protected as long as the current government holds power.

Orban took credit for strong economic growth in recent years and the growing middle class and generous family support programmes, that favour upper-middle-class households with children. He recalled the recent economic measures timed before the election, including the personal income tax exemption for the under 25s and the 20% rise in the minimum wage.

Orban said the "greatest achievement" was that the Hungarian economy had withstood the crisis.

He said Hungary’s economy would have performed even better if it was not for global inflation. The government had kept a lid on inflation by introducing caps on the price of fuel, household utilities, interest on loans and basic foods. Family benefits, he said, would be expanded if Fidesz wins the election, he said.

Orban announced that the price cap on fuel would be extended by another three months period.

As for the ongoing conflict between Russian and Ukraine, he warned of a refugee wave if Russia invades Ukraine. It was in Hungary’s best interest to avoid war, which he said would cause a wave of Ukrainian refugees and a disruption of the economy.

Hungary’s strongman also took a harsh line towards the European Union in the ongoing feud regarding rule of law issues.

"The European Commission is not interested in facts or arguments; they're fighting a holy war, a jihad of the rule of law."

On February 16, the European Court of Justice is expected to rule against the challenge filed by Hungary and Poland in the conditionality debate with the European Union, paving the way for Brussels to link EU funds to meeting democratic values.

"While PM Orban did talk about the challenges of the Hungary-European Union relationship," he did not hint at Hungary leaving the bloc, as German news agency dpa stated in its headline.

While Orban spoke disparagingly of Gyurcsany, he never said out loud the name of his challenger, Peter Marki-Zay, who was selected by voters in the historic primaries in the autumn.

"As I guessed his speech would be, it was an empty speech riddled with confusing visions and fancy phrases. The only virtue of his speech was that it was his last as prime minister," the 49-year conservative mayor of Hodmezovasarhely commented on Saturday.

Gyurcsany, who is the leader of the largest opposition fraction, the leftist-liberal DK, held a keynote speech on Friday.

The Orban government isn't strong, but harsh, and isn't Christian," Gyurcsany said. "It must be made clear that there are "pagan barbarians, who wrap themselves in the holy causes of Christianity to mask their transgressions and misdeeds."

The candidates of the ruling radical rightwing Fidesz party and all six parties of the united opposition have collected the required number of signatures to run in all 106 individual constituencies in Hungary's April 3 general election.

Under Hungary’s election law, the campaign officially starts fifty days before the date of the ballot and runs until the close of the polls on election day at 7 pm.

Voters can cast two ballots in the single-round election, which decides 199 seats. One directly elects lawmakers in 106 individual constituencies, while the other is cast for a party list.  Prospective candidates must secure 500 valid signatures by February 25.

NEMETHY: Is the world heading towards a “polycrisis”?
Hungary agrees on deferred payments with Gazprom for winter gas deliveries
Orban faces perfect economic storm of his own making