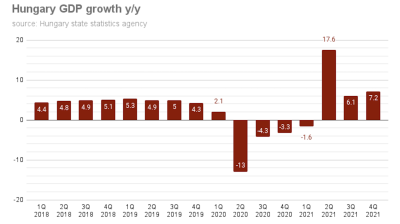 Analysts and the government have begun to revise their 2022 GDP forecasts after the latest Q4 GDP data published on February 15. Statistics office KSH said that the economy expanded by 7.2% y/y in the last quarter, or 7.1% when adjusted to working days, bringing full-year growth to a record 7.1%, a sharp rebound from the 5.1% decline in the previous year.

On a quarterly basis, GDP rose 2.1%, well above the 1.3% consensus, the second-fastest quarterly rise on record, excluding the post-lockdown rebound. Quarterly GDP has grown for the sixth straight quarter.

Hungary’s economy, which bounced back from a 5.1% recession in 2020, is now 4% above its pre-crisis level in terms of real GDP.

Growth was driven by market services, KSH said, which will release a detailed breakdown by sectors next week, but Finance Minister Mihaly Varga unveiled more details about the growth structure.

All branches of the economy performed well, with the exception of the farm sector which was impacted by bad weather. In spite of the global parts shortage, industrial output climbed 9.6% last year, while the construction sector expanded 13%.

The ICT and tourism sectors both grew close to 20% last year.

The record 7.1% growth last year confirms the government's economic policy based on tax cuts, support for families and businesses, and investments, according to Varga.

Hungary's investment rate was among the highest in the EU and nominally it reached HUF15 trillion (€42.2bn).

The Finance Ministry revised 2022 GDP growth projections by 1pp to 5.9%.

The stronger-than-expected Q4 data also means that GDP growth this year could be 0.8pp higher in 2022 due to the carry-over effects, opined ING Bank analyst Peter Virovacz.

The bank’s baseline scenario is that GDP will expand 6% this year and inflation will peak above 6%, which is also above the consensus.

In light of the recent data, the central bank will likely continue its monetary tightening for a longer period and the base rate could peak at 6%, which is some 0.5pp above analysts target.

Takarekbank also raised its GDP forecast from 6% to 6.3% in 2022, citing a consumption boom due to massive government transfers and strong wage outflows.

With the easing of global supply chain problems expected from H2 industrial output could take off as new capacities were added in the manufacturing sector in recent months.

Hungary’s tourism sector could also be a major contributor to growth with the easing of COVID-19 restrictions abroad and the return of international travel. Budapest will be host to the FINA World Swimming Championships in the summer and after two years, Central Europe's largest open-air festival, Sziget will welcome visitors from abroad.