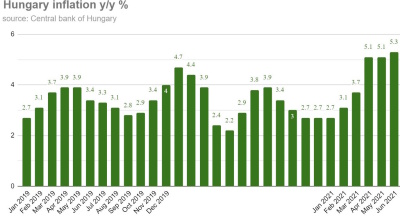 Consumer prices in Hungary accelerated to 5.3% in June, hitting a new record for this year, and the highest figure since end-2012. The data came as a negative surprise, as most analysts had expected inflation to dip to 4.9% from 5.1% in the preceding two months.

Reopening-related price pressures in Hungary are pushing headline and core inflation even higher, which is likely to trigger further rate hikes by the National Bank (MNB).

The central bank embarked on a monetary tightening course last month to tame rising inflation and vowed to continue rate hikes until inflation falls back to its medium-term target of 3%.

On a monthly basis, the headline data climbed 0.6% and in the first five months it averaged 4.2%.

Driven by higher cigarette and vehicle fuel prices, CPI is at the highest level in years and well outside the 2-4% tolerance band of the National Bank, the statistics office KSH said.

Core inflation, which excludes volatile food and fuel prices, was 3.8%, from 3.4% in the preceding month.

In a monthly analysis, the MNB attributed the rise in inflation mainly to the price growth of regulated products and services and market services. Fuel prices contributed 1.4pp to headline inflation. It also noted an increase in the contribution of demand-sensitive products and repricing effects.

Inflation in June was significantly higher than expected by the MNB, which means there is a higher chance that in July the central bank raises its base rate further by 30bp to 1.2% after a 30bp rate hike last month.

Reopening-related inflation was barely seen in May, but it arrived in June in the price of rising foodstuffs and services, ING Bank said in a note. For the year, CPI could be at 4.5% with inflation moderating in the coming months but rising back to above 5% at the end of the year because of base effects, senior economist Peter Virovacz said.

The latest data support the launch of a cycle of interest rate hikes by the MNB, with a number of upside risks to CPI still present, Takarekbank said.

At the last rate-setting meeting,  the MNB raised its 2021 inflation forecast from 3.9% to 4.1%. It said it expects inflation to stabilise around its medium-term target of 3% from mid-2022 thanks to proactive monetary policy steps.

Analysts say the July 27 rate-setting meeting will be a benchmark for the pace of interest rate increases to come in the coming months.

The EUR/HUF exchange rate slipped to 358 on Thursday night on inflation concerns and political risks with the possible launch of the rule of law criteria that could strip Hungary of EU funds vital for its economy. The forint has lost all its gains since the central bank flagged a possible rate hike in June, which now is seen as the beginning of a monetary tightening cycle.

Over the last three weeks, the forint shed 3.5% in three weeks from 345 versus the euro. The markets are pricing in more rate hikes and there is a fear that the MNB may fall short of expectations.