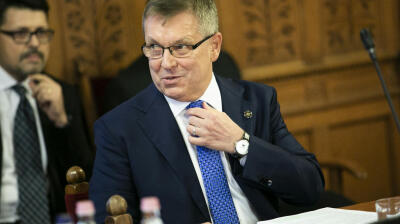 The forint traded at 370.8 to the euro after the closure of the interbank forex market on November 22, one notch above the previous low recorded on April 1, 2020, during the market rout. The USD/HUF was trading at its weakest level on record at 329.3.

Analysts attributed the forint slide to risk aversion on emerging markets (linked to the Fed's tapering strategy), Hungary’s lax response to record COVID-19 infections, and the financial consequences of the EU's rule of law proceedings. In the short-run, economists noted the expansionary fiscal policy and pre-election spending spree as an upside risk to inflation.

Policymakers bowed to market pressure last week to raise the base rate by 30bp to 2.1% to counter inflation, which hit a nine-year high in October. Two days later, policymakers raised the one-week deposit rate by 40bp to 2.5% to shore up short-term rates, yet it did little to stem the forint’s fall.

Hungary’s central bank became the frontrunner in the hiking cycle both regionally and globally with a 0.3bp hike in June from a record low of 0.6%. This was followed by two 0.3bp hikes in the next two months.

The MNB’s proactive approach in policy setting from June marked a clear shift from its earlier stance. This was preceded by comments by MNB deputy governor Barnabas Virag, who warned that central banks must not underestimate the risks of a sustained rise in inflation. The central bank would react to sustained inflation risks by changing its key base rate, while the one-week deposit rate (0.75%) would be used to tackle short-term shocks in risk premia, he said in May.

The EUR/HUF rate was quoted in a tight range of 350-355 between May and September. The Hungarian currency, which shed 10-10% of its value in 2019 and 2020 versus the euro, began to slide following the September Monetary Council meeting when policymakers slowed the rate hike from 30bp to 15bp, below expectations.

Since then, central banks in Poland and the Czech Republic picked up the pace with a 75bp and a 125bp hike and the dollar has strengthened further.

The markets were bracing for a more aggressive tightening by the MNB, and they may not have yet digested the central bank’s strategy. The divergence between the base rate and the one-week deposit may be too complicated, commented ING Bank analyst Peter Virovacz.

Analysts agree that the MNB is in a tight spot as it aims to curb soaring inflation with tighter policy at a time when fiscal policy remains expansionary.

Hungary’s central bank governor has warned about the fallouts of unrestrained spending by the government ahead of the 2022 election, which would fuel inflation lead to a twin deficit in the budget balance and the current account.

The government of Vitkor Orban aims to spend around 7.5% of the GDP in transfers and state investments in Q4 2020 and Q1 2022

The MNB could easily find itself in a trap where imported inflation will feed into consumer prices through a weaker forint, triggering further monetary tightening.

Analysts say the December meeting will be key for long-term monetary policy as the MNB will revise its growth and inflationary targets for 2021 and 2022. This will also serve as a benchmark for the government to amend the 2022 budget.

Technical analysts say the forint could weaken further in the coming days.

"The Fibonacci [sequence] suggests a potential resistance at 373.15. The negative divergence between the RSI indicator and the exchange rate persists, but emerging market currencies are under strong pressure," says brokerage Equilor.

There is consensus that the MNB will raise the one-week deposit rate from 2.4% at its Thursday tender.  Some economists predict a stronger intervention.

An improving global environment and a weaker dollar could put some pressure off the forint in the second half of December, according to ING Bank.