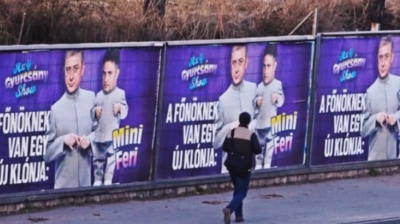 Fidesz attack posters against the opposition.
By bne IntelliNews February 25, 2022

Hungary is ranked in the "partly free" category in the latest edition of the Freedom of the World report, published by Freedom House on February 24. The latest ranking by the US-based NGO marks the eighth consecutive year of decline.

Under Viktor Orban’s illiberal regime, Hungary has slid in both categories, civil liberties and political rights. The country recorded the steepest drop in the ranking as a democracy over the last 10 years, going from "free" to "partly free", dropping a whopping 19 points. It was followed by Nauru (-16 points) and Poland (-12 points)

Over the last 12 years, the ruling radical rightwing Fidesz party pushed through constitutional and legal changes that have allowed it to consolidate control over the country’s independent institutions, including the judiciary, according to the report

The Fidesz government has since passed antimigrant and anti-LGBT policies, as well as laws that hamper the operations of opposition groups, journalists, universities, and nongovernmental organizations (NGOs) that are critical of the ruling party or whose perspectives Fidesz otherwise finds unfavourable.

In summer 2021, Hungary’s parliament passed a controversial law that many see as conflating sexual diversity with paedophilia. Analysts opine the government passed the law with the purpose of creating another dispute with the EU, with the goal of diverting attention from Hungary’s democratic slide and rampant corruption.

With the EU’s new rule of law mechanism coming in force, the government can hide behind the legislation, which it dubbed the "Child Protection Law" to fend off these criticisms. There will be a referendum on the issue on April 3 on the same day as the general election, which allows the ruling Fidesz party to change the discourse.

The report also names the lack of a level playing field ahead of the 2022 April elections. Opposition parties and candidates faced many obstacles in the 2018 parliamentary polls that diminished their ability to freely compete with Fidesz. The OSCE cited the "pervasive overlap between state and ruling party resources".

The report notes that the government has used a state of emergency to rule by decree and this was prolonged several times in 2020 and 2021. During this time, the government used its power to seriously restrict civil liberties unrelated to public health.

The Freedom House report touched on the Pegasus scandal. Independent journalists, businessmen, lawyers, and politicians were the targets of secret surveillance conducted with the Israeli-made spyware, Pegasus.

A Fidesz MP admitted the purchase of the spyware, but denied allegations that it was used illegally. Civil groups say that is because of lax regulation on surveillance of Hungarian individuals. Since then, more evidence has emerged that it was used against people critical to the government.

First official results from Bosnian elections put nationalists ahead after exit polls predicted losses
18 minutes ago
US sanctions Russia’s CBR head Nabiullina and other officials
53 minutes ago
Russia prepares for new attacks against Ukraine from Belarusian territory
1 hour ago
Blue and yellow returns to Lyman, Borova and Mikhailivka as Ukraine liberates settlements in east and south
1 hour ago
Bulgaria’s fragmented parliament unlikely to produce stable new government
8 hours ago