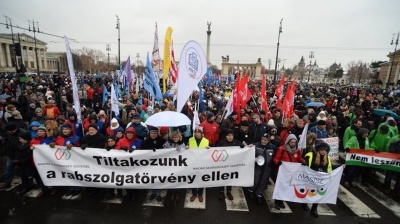 Some 10,000 took to the streets against the government in Budapest
By bne IntelliNews January 7, 2019

Hungary's opposition parties on January 5 called for further protests, while trade unions announced nationwide demonstrations for January 19 in protest against recent amendments to the labour code.

Organised on Facebook, the protest was dubbed "National protest against the slave law" and joined by opposition parties, unions and civic organisations. Protests were held in several Hungarian cities and abroad. In Budapest, some 10,000-12,000 people showed up in sub-zero temperature.

The demonstrators were chanting "we won't be slaves" and "Fidesz mafia". They carried flags of the unions, the opposition Socialist, Jobbik, LMP and DK parties as well as Roma flags and those with the stripes of the House of Arpad, the symbol used by right-wing nationalists.

Parliament approved the legislation on December 12 in chaotic circumstances, which sparked the longest anti-government demonstrations since the right-wing government of Viktor Orban took power in 2010.

The contested amendment of the labour code would allow employers to extend overtime from 250 hours to 400 hours, while extending the period employers may account overtime for the purpose of calculating wages and rest days from 12 months to three years.

Labour unions fear that this would allow companies to not to pay extra for overtime work, as the overtime hours could simply be offset later by off-time work.

The new rules are widely seen as a concession for multinational companies, especially in the vehicle sector, which are facing a labour crunch. The bill aims to make manufacturing in Hungary even more attractive for foreign direct investment.

Prime Minister Orban defended the amendments, saying they will allow workers who want to work more to earn more.

“The amendments will result in higher wages, and these higher wages will be paid to workers monthly, as they have till now, in spite of the lies of the opposition," Orban told the pro-government daily Magyar Idok on December 27. The same interview was published at the same time in all 19 county newspapers formerly owned by Lorinc Meszaros. Since the end of November, some 500 pro-government media sites were transferred to a foundation run by people close to the PM.

Speakers at Saturday’s rally called for resistance and strikes. Labour union leader Laszlo Kordas said that they would present a list of demands to Orban on Tuesday and give five days to the government to set up a negotiating committee.

If the government fails to set up the committee by the deadline, the unions will hold a nationwide warning strike, and protesters will block roads and bridges, he said. The trade unions are prepared for "a militant period" because the government has "made a deal with capitalists" and "chose to side with heinous profit-hunters", he said.

The contested labour code changes have created unity between opposition parties, who are also demonstrating for a free and democratic Hungary. Opposition parties have framed a five-point demand, which includes a call for joining the European Public Prosecutor’s Office and the withdrawal of the legislation creating public administrative courts, which opponents say is undermining the rule of law and the independence of the judiciary.

Government officials and pro-government propaganda are depicting protesters as "Soros-agents and anti-Christians".

"The opposition parties' idea to run on a joint list in the European election means that there will be an anti-migration list where votes for Fidesz-Christian Democrats can be cast and there will be a 'Soros list' for those who support migration and [billionaire philanthropist George] Soros,” parliamentary group leader of the ruling Fidesz said in public interview.