How well prepared is Ukraine to face down the coronavirus pandemic? 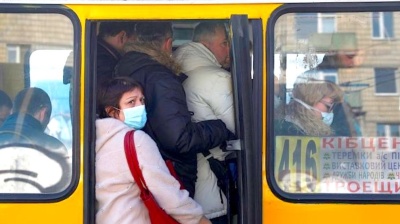 Ukraine's economy is in a lot better shape than it was in 2014 during the last shock, but its reserves are limited and the impact of the economic downturn is expected to be severe.
By Ben Aris in Berlin March 22, 2020

Coronavirus (COVID-19) is now well established in Ukraine, but the epidemic there has only just got underway. Following a major economic crisis in 2014 how well prepared is Ukraine to absorb the economy shock that is clearly on the way?

As of March 20 Ukraine had 14 confirmed cases, including three children, and three fatalities. Most of those infected were clustered in the Chernivtsi region where there were 10 cases, followed by two in Kyiv and the surrounding region and another in the Zhytomyr region.

So far coronavirus has been a problem imported into the country by Ukrainians returning from abroad, but with the outbreak in  Chernivtsi the virus is now a domestic problem and the number of infections are bound to soar.

The government has been fast to act and on March 20 voted in a raft of measures to tackle the virus, including hiking the pay of medical professionals and introducing punishments for those that violate quarantine rules.

It's still early days and Ukraine is well placed to nip the infection in the bud, but the experience of other countries is that containing the outbreak is hard. At the time of writing Ukraine had only conducted 600 tests and needs to massively ramp this up if it is to control the outbreak. Last week Ukrainian President Volodymyr Zelenskiy called on the country’s top businessmen to help, specifically to help buy the medical equipment that is needed.

So far there are no estimates on the size of the impact that the virus is likely to have on Ukraine’s already struggling economy. But in a sign of things to come Goldman Sachs announced on March 20 that it estimates a 24% contraction in the US economy in the second quarter, which is a lot bigger than the last biggest q/q contraction of 10% in 1958. The investment bank also said the unemployment rate to go to at least 9%.

Ukraine in a better starting position

Ukraine goes into this crisis in a much better condition than it did into the last crisis in 2014 that saw a 17% contraction of the economy at its worst point in the first quarter of 2015.

Likewise the hryvnia was hit hard in 2014 when it tumbled from about UAH8 to the dollar to just under UAH30 in a rapid devaluation. Although the currency quickly recovered some of the ground lost during the shock of the revolution, since then it has continued to slide from around UAH20 in 2015 to trade at about UAH25 in the last year.

The first impact of the arrival of the coronavirus was to send Ukrainians to the banks to panic buy dollars as they anticipate yet another devaluation. The National Bank of Ukraine (NBU) stepped in and pumped over $1.5bn into the foreign exchange market in the week of March 16 but the hryvnia had already slid to UAH27 and with only $26.6bn in reserve the central bank cannot afford to keep propping up the national currency for long without burning through its crucial reserves.

The timing of the arrival of the coronavirus is particularly unfortunate as Russia’s state-owned gas giant Gazprom agreed to pay a $2.6bn fine in December that significantly boosted reserves in January giving the country a bit more wiggle room. But if the NBU continues to burn through its reserves at the same rate as it has been in the last two weeks, that money will be used up in less than three weeks.

However, the country is in a stronger position when it comes to inflation. Following several years of very low inflation, the prices of goods soared in 2015 as the currency and economy collapsed to reach a crushing high of 60% in May 2015. It took a year to get inflation under control again, but even then it remained in the teens for the next four years. It was only in 2019 with real interest rates of 10% that the NBU finally defeated inflation, which has been falling rapidly in the first quarter of this year. Going into the coronavirus crisis inflation was only 2.4% — a post-Soviet low.

If the currency slides further then that will feed through to pushing up prices again over the next six months. The NBU has been aggressively cutting rates at its last few meetings, and cut again by a full percentage point in February. And the government has managed to pay down debt to bring the debt to GDP ratio to a comfortable 60%.

“But many issues remain,” says Elina Ribakova, deputy chief economist for the Institute of International Finance (IIF). Ukraine has failed to close a $5.5bn Extended Fund Facility (EFF) with the International Monetary Fund (IMF) despite the fact the principle terms of the deal were agreed in December. And investors were unnerved after Zelenskiy shook up the government with a major reshuffle on March 3. That included the sacking of the technocratic prime minister Oleksiy Honcharuk as well as the well respected ministers for finance and economy. Finally the role of oligarch Ihor Kolomoisky, who financed Zelenskiy's election campaign, has not been resolved.

Ribakova and the IIF released the worst case scenario for Ukraine in the crisis with estimates of where the country might be by December, which makes for grim reading. It includes zero disbursements from the IMF this year, zero Eurobond issues, zero financial help from the EU, outflows from the local bond markets, and a decrease of $7.1bn of the hard currency reserves – enough to spark another deep devaluation of the hryvnia. 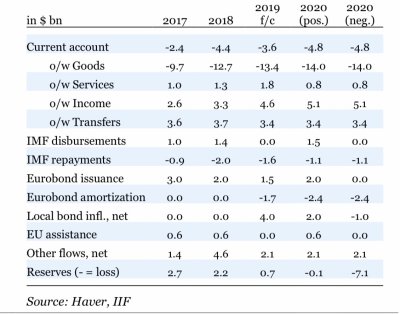 “There is a high change that with the combination of coronavirus and no IMF deal this will turn into the baseline scenario for Ukraine,” Ribakova tweeted on March 21.

Closing the deal with the IMF was important before, but now it is crucial. The crisis has already seen the yields on Ukraine’s 2028 Eurobonds soar by 150bp to over 11%, which effectively shuts the sovereign out of the market. At the same time a collapse of the talks with the IMF would not only keep Ukraine’s borrowing costs on the international capital markets high, it also cuts off Ukraine’s access to its other donors, whose loans are all contingent on first getting an IMF deal in place.

“Without the IMF programme there won’t be market access for Ukraine,” says Ribakova. That’s important as Ukraine has a heavy debt repayment schedule this year and not enough in reserves to pay all of it on its own. As the IIF chart of the positive and negative scenarios shows, closing the IMF deal makes all the difference to the money Ukraine can raise. "Upcoming debt repayments remain significant. The NBU has reserves, but outflows tend to accelerate as reserves fall,” adds Ribakova. 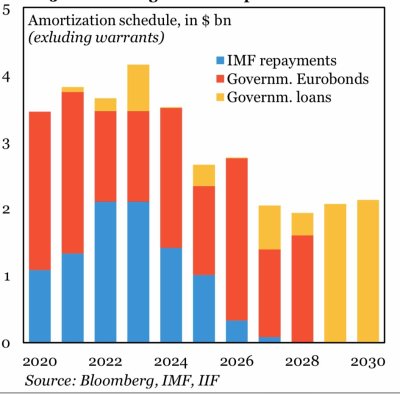 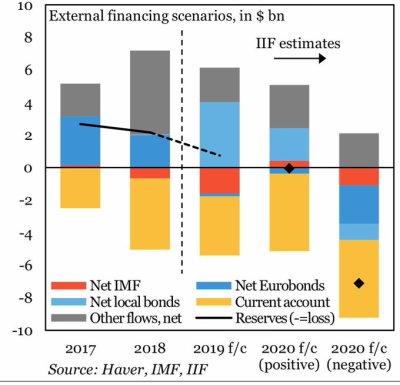