Heated exchanges between US and Russia at UN open session 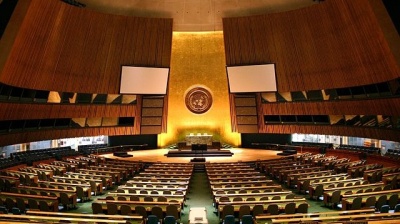 America's ambassador to the UN warned of "horrific" consequences in the event of war, while the Russian envoy accused the West of warmongering. / Image: Patrick Gruban via Wiki Commons.
By Theo Normanton in Moscow February 1, 2022

An open session of the UN Security Council on Monday saw US and Russian envoys clash over the troop build-up on the Russo-Ukrainian border.

The special open meeting was called by the USA to discuss concerns surrounding escalating tensions between Russia and Nato’s allies. Linda Thomas-Greenfield, America’s ambassador to the UN, warned that any Russian invasion of Ukraine would have “horrific” consequences.

“Russia’s actions strike at the very heart of the UN charter. This is as clear and consequential a threat to peace and security as anyone can imagine,” she said.

Ms Thomas-Greenfield claimed that this was the biggest troop build-up Europe had seen for decades, and stressed that it posed a threat to all UN members.

Meanwhile, Russia’s UN envoy, Vasily Nebenzya, berated Washington and the West for drumming up anti-Russian hysteria, pointing out that Moscow has repeatedly denied allegations that it is preparing to invade Ukraine.

“The discussion about a threat of war is provocative in and of itself. You are almost calling for this. You want it to happen. You’re waiting for it to happen as if you want to make your words become a reality,” Nebenzya said in response to Ms Thomas-Greenfield’s accusations.

The US and the UK are continuing to promise severe sanctions in the event of a Russian invasion, including a threat to cut Russia off from the financial system or the dollar. But the Western allies introducing quite such a mutually damaging package of sanctions remains unlikely.

After the meeting, both the US State Department and the White House re-iterated their desire to resolve the disagreement diplomatically.

“If Russia is sincere about addressing our respective security concerns through dialogue, the United States and our Allies and partners will continue to engage in good faith,” said President Joe Biden in a statement.

Meanwhile, talks aiming to diffuse the tensions continue in earnest. US Secretary of State Anthony Blinken is due to call Russia’s Foreign Minister Sergei Lavrov on Tuesday, February 1, and UK Prime Minister Boris Johnson is flying to Kyiv the same day, and is due to call the Kremlin this week to continue talks.

BREAKING: Putin signs off annexation of four Ukrainian regions
18 minutes ago
Kremlin preparing for a protracted conflict by putting Russian economy onto a war footing
4 hours ago
Hungary’s forint slides to new low after central bank ends tightening cycle
7 hours ago
Slovak ministers criticise Czech border controls
7 hours ago
Might Trussonomics be a branch of Erdoganomics?
12 hours ago