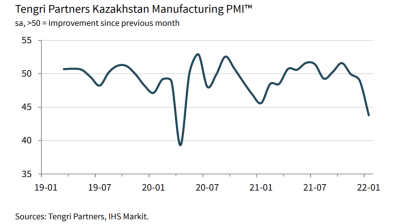 The imposition of a state of emergency in Kazakhstan in early January amid civil unrest hit the Central Asian nation’s manufacturing sector, according to the latest purchasing managers' index (PMI) survey data from Tengri Partners and IHS Markit.

The index posted 43.8 in January, down from the 48.9 recorded in December, according to the PMI survey report released on February 1. Any figure below 50.0 represents a deterioration.

Anuar Ushbayev, managing partner and chief investment officer at Tengri Partners, said: "The state of emergency in the first half of January clearly had a big impact on the ability of manufacturers to operate and led to a particularly difficult month in terms of securing new orders from customers, being able to maintain production and securing materials from suppliers."

"With the state of emergency having come to an end, firms will be hoping for an improvement in conditions in February and beyond. In line with this, confidence around the outlook for production hit a seven-month high," he added.

Company closures, restrictions on sales of certain items and restrictions on the movement of the population all lead to sharp reductions in output and new orders. New orders fell at the fastest pace in 21 months as material shortages added to the disruption caused by the state of emergency, with output also down to the greatest extent since April 2020, the survey report said.

Employment levels declined at the sharpest pace since the manufacturing sector PMI survey began in March 2019. The state of emergency, some workers being on unpaid leave and others leaving for better paid jobs elsewhere led to a record reduction in staffing levels during January. Around one-in-five respondents indicated that their workforce numbers had fallen over the month, Tengri and IHS Markit noted.

The rate of input cost inflation eased to a 22-month low, but firms continued to raise their own selling prices at the same pace as in December.

Despite the challenges faced by firms in January, respondents were generally optimistic that output would increase over the coming year. In fact, sentiment was the highest since June last year. That said, a number of manufacturers highlighted the difficulty of making predictions at present, the survey report added.