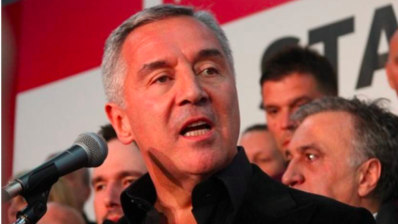 Atlas Banka head Dusko Knezevic claims to have given a €10mn villa to President Milo Djukanovic (pictured), but this has been denied by the president.
By Denitsa Koseva in Sofia January 22, 2019

The head of Montenegro’s troubled Atlas Banka, Dusko Knezevic, has provoked a scandal in the tiny country, accusing President Milo Djukanovic of corruption and claiming a warrant was issued for his arrest upon pressure from a clan related to the president. He claims that the president and his family are trying to take over his businesses and properties along Montenegro’s Adriatic coast.

The businessman also talked of a wider rot within the Montenegrin banking sector, claiming that three banks are particularly at risk.

Knezevic, who has a previous history of bankruptcy, has been charged with abuse of office and the prosecution has issued an international arrest warrant for him. A Montenegrin court ruled several weeks ago that, once arrested, he must spend one month in detention.

Atlas Banka was put under temporary administration by the central bank in December along with Invest Banka Montenegro (IBM) as its audit showed that the capital of the two lenders did not comply with the minimum risk requirements. While IBM will go bankrupt, Atlas Banka decided to increase its capital and can be stabilised. The two banks are both owned by Knezevic’s Atlas Group.

The scandal has now escalated further as a video showing Knezevic giving money to a member of Djukanovic’s long-ruling Democratic Party of Socialists (DPS) was released. The money was allegedly donated to support Djukanovic’s campaign for president; he returned to the presidency in April 2018.

The troubled businessman claims in article posted on his LinkedIn profile that he was one of the DPS’s biggest donors for the last 25 years.

“They know very well the exact amount of donations. Did they declare donations are a direct question for Djukanovic? As for Mr. Djukanovic, we had the habit of discussing scrupulous issues (sic) from time to time,” Knezevic said.

He claimed that “if you want to do business in Montenegro, you must be a donor of the Democratic Party of Socialist and their families”.

Knezevic also indicated he had given a €10mn villa to Djukanovic.

This is not the first time Montenegro’s president — the most experienced and popular politician in the country — has faced accusations of corruption, but he has always managed to escape consequences. He denied being the owner of the villa, but admitted that Knezevic has donated money to his party. However, Djukanovic claims the sums were significantly lower than Knezevic claims to have donated.

Moreover, Djukanovic denied being a friend of Knezevic, and said that he had never asked the banker to support him financially. The politician claimed that Knezevic is lying in order to divert attention from his own legal responsibility.

Djukanovic’s DPS also replied to Knezevic’s accusations in several statements. The party said that recent events have shown the law treats everyone the same, and that Knezevic is lying about having the support of the party’s youth organisation.

Rot in the banking sector?

In an interview with Vijesti, Knezevic made broader claims about the situation in the Montenegrin banking sector, telling the newspaper that three other banks have been dealing with “suspicious transactions” and their clients are “especially vulnerable”. Unlike the two banks within Atlas Group, however, these banks are “under the direct protection of the regime,” he claimed.

Meanwhile, on January 21 the police arrested former central bank governor Velibor Milosevic, following Knezevic’s claims that, while holding the position at the central bank, he had blackmailed him in order to pay those in charge of banking supervision to relax control over Knezevic’s banks. According to broadcaster RTCG, the police arrested several others, also suspected of participating in the corrupt scheme.

Montenegro’s central bank issued a statement, claiming that it is executing banking supervision properly, but in order to clear up any suspicions of corruption has encouraged the prosecution to investigate everyone that might have been involved in illegal activities. The bank also said that it will carry out an internal investigation.

Knezevic was once owner of Atlas TV. In 2016, the TV channel went bankrupt leaving a €3mn unpaid debt, according to RTCG. This sum included €800,000 in unpaid salaries, and a trial for their repayment is ongoing.

In 2018, hospital Meljina, privatised by Knezevic’s Atlas Group, also went bankrupt due to its poor financial condition. A higher court annulled the bankruptcy decision, but the situation at the hospital has not improved and Knezevic says he will complete the bankruptcy procedure.