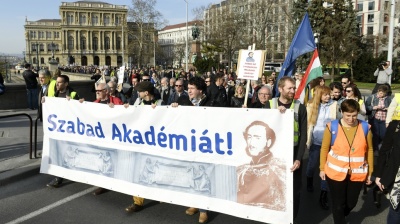 The government of Prime Minister Viktor Orban is planning to submit a bill to parliament that effectively would take over more than a dozen of the Hungarian Academy of Sciences' (MTA's) research centres and their property, a further blow to academic independence, local news outlet Index.hu reported on May 29.

The proposal includes extending control over 15 research institutes from the MTA and the creation of a new state research network, controlled by a 13-person body, of which six people would be appointed by the MTA and six by the government. The president would be named by Orban based on a joint proposal.

The body will decide on the reorganisation, abolition, or creation of research bodies, and the appointment of their leaders.

According to Index, the plan to nationalise the MTA network has been ready for some time but the government decided to wait until after the European parliamentary elections to avoid the political fallout.

The proposal to take control over MTA’s funding and research network came after long negotiations.

The government decided last year to reroute funds from MTA, and in January it launched a tender for the funds instead of allowing research institutions to allocate them.

The government argued that the MTA’s research network, doing mostly basic research, is not efficient and Hungary's entire R&D should be overhauled.

The MTA said earlier that it supports efforts to enhance Hungary’s RDI performance, however, this aim can only be reached if the research network of the Academy is preserved. The MTA’s research network employs 5,000 people, including 3,000 researchers.

The state would also create the National Council of Scientific Policy (NTT), headed by Minister for Innovation and Technology Laszlo Palkovics, who will be in charge of suggesting appointments.

MTA will only have a single representative on this body. The council will be in charge of making proposals about the main directions of research and which ones would be funded.

The proposed changes would mean that the academy would lose most of its power over research, Index wrote. Representatives of MTA were not even invited to the latest rounds of negotiations over its fate, with the government even failing to answer their letters of inquiry.

The EU has launched an infringement procedure against the government over the contested amendment in the higher education act, which paved the way for the expulsion of the Central European University (CEU) founded by Hungarian born philanthropist George Soros.

Pristina mayor Shpend Ahmeti said on June 25 that Serbian state-owned telco Telekom Srbija has placed the highest bid worth €155mn to acquire its Kosovan peer IPKO Telecommunications, but that ... more

Mohammad Reza Hayati, for more than three decades the face of the news on Iran’s state-controlled television, is ... more

Turkish fintech Figopara, established in 2017, has raised a million dollars in its second financing ... more