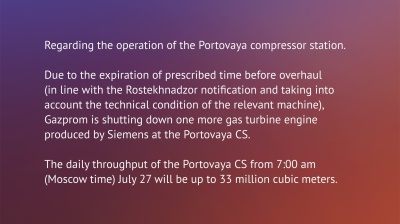 Gazprom says another compressor unit will be shut down, further reducing gas flows to only 20% of capacity. At the same time, the Russian gas company says there are still problems with the documents allowing a compressor unit sent to Canada for repairs to be returned. / wiki
By bne IntelliNews July 25, 2022

Russian natural gas flow via the Nord Stream pipeline to Europe will be restricted further to only just above 20% of its capacity from the morning of July 27, Gazprom said on its Telegram channel on July 25, prompting a spike in European gas prices.

Gazprom said that the further curtailment in gas flow through the pipeline was due to the shutdown of an additional Siemens gas turbine at the Portovaya compressor station that handles Nord Stream supplies.

“Due ot the expiration of prescribed time before overhaul (in line with the Rostechnadzor notification and taking into account the technical condition of the relevant machine), Gazprom is shutting down one more gas turbine engine produced by Siemens at the Portovaya CS,” Gazprom said in a statement on its Telegram channel.

“The daily throughput of the Portovaya CS from 7:00am (Moscow time) July 27 will be up to 33 million cubic meter,” the Russian gas giant added. 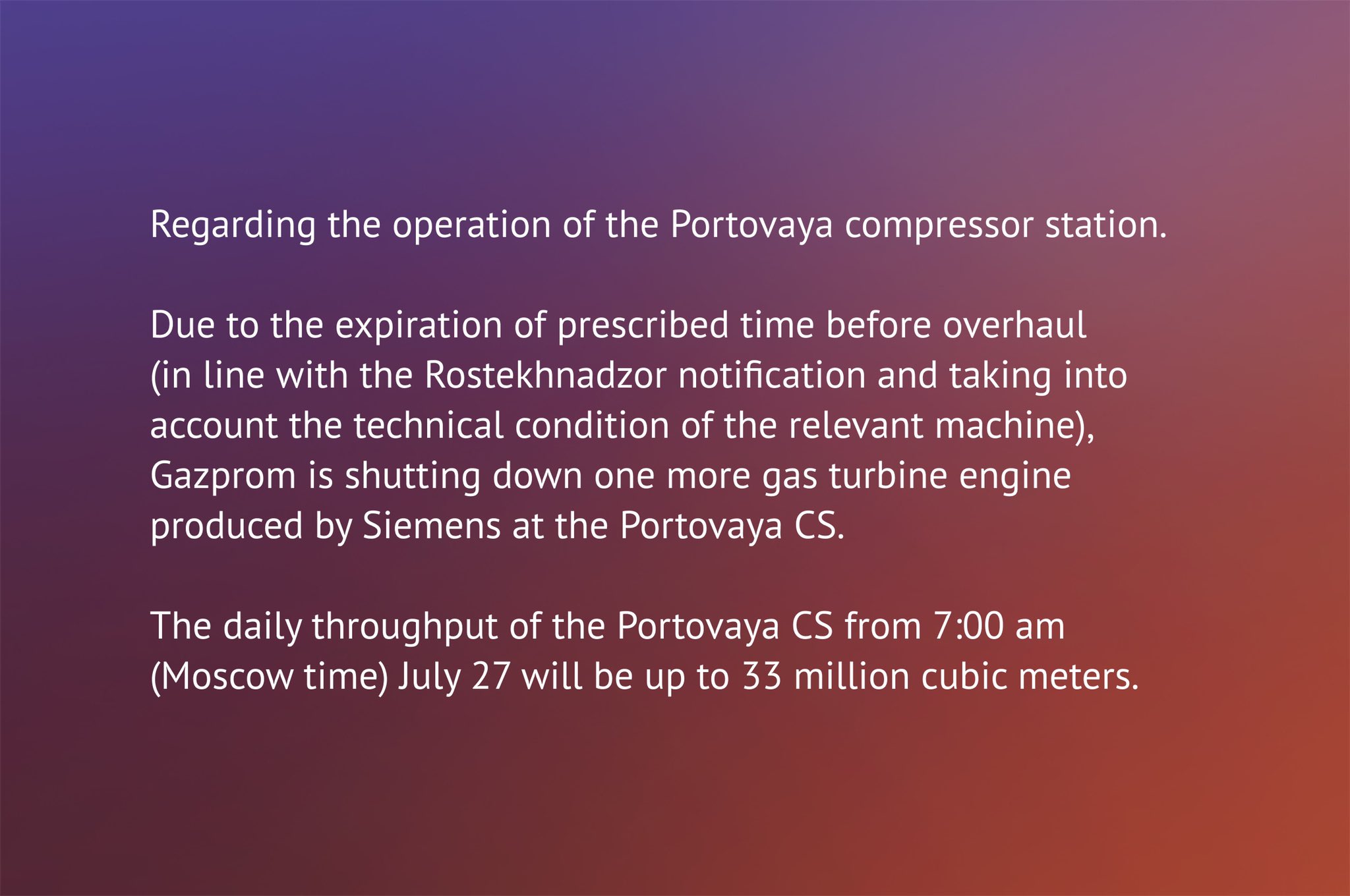 The pipeline is already working at no more than 40% of its capacity because of the delayed return of a Siemens turbine that had been sent off to Canada for repair. Gazprom reduced flows of gas to Europe by 60% in the middle of June when the compressor was sent to Canada but not returned by Siemens, due to sanctions.

Canada has since decided to return the compressor in the hope that Gazprom will boost gas flows again to 100% capacity and the EU has ruled that the decision “does not violate sanctions.”

However, Gazprom has said that it has no received the documents and while the compressor left Canada on July 17 it has still not arrived in Russia. Once it does it will still take several days to install it.

Gazprom said on July 25 that it has now received the documentation from Siemens provided by authorities in Canada, relating to a turbine needed for the Nord Stream 1. But the gas company has said there are still outstanding “issues” that need to be resolved for the turbine’s return to Russia.

Russian business daily Kommersant reported on July 24 that Siemens had transferred an export licence issued by Canada to Gazprom relating to the turbine. But in order for Siemens to ship the unit from Germany, where it has already arrived, to Russia, the documents must be adjusted further.

“In addition, the issues regarding the sanctions imposed by the EU and the UK remained unresolved for Gazprom, although the resolution of such issues is important for delivering the engine to Russia and performing urgent major repair of other turbine engines for the Portovaya CS,” Gazprom said in a statement.

“In these circumstances, Gazprom once again asked Siemens for immediate support in providing the necessary documents and clarifications to resolve the remaining open issues,” the company concluded.

Sources told Kommersant that it was unclear whether the reinstallation of the turbine would result in an increase in gas flow via Nord Stream, which is currently capped at 30-40% of the pipeline’s capacity. What is more, Gazprom said in later message on July 25 that another turbine engine would be halted at the Portovaya station because of its technical conditions, meaning that the amount of gas that the facility handles would be restricted 33 mcm per day, or 12 bcm per year, equivalent to 22% of Nord Stream’s capacity.

The delays follow tactics similar to the negotiations that resulted in the Istanbul grain deal on July 22 that saw Russia allow grain exports from Ukraine’s ports. Russia has made grain exports impossible with a naval blockade and threatened to spark a food crisis. The key negotiating point for the Kremlin in the talks was for the West to relax sanctions on Russia’s own exports, a point the Western negotiators conceded. Grain exports from Ukraine are due to resume this week.

The Kremlin appears to be playing a similar game here. With gas storage tanks only 65% full it is threatening another crisis by reducing flows even further and Gazprom is making it clear that it wants sanctions on its gas exports eased. 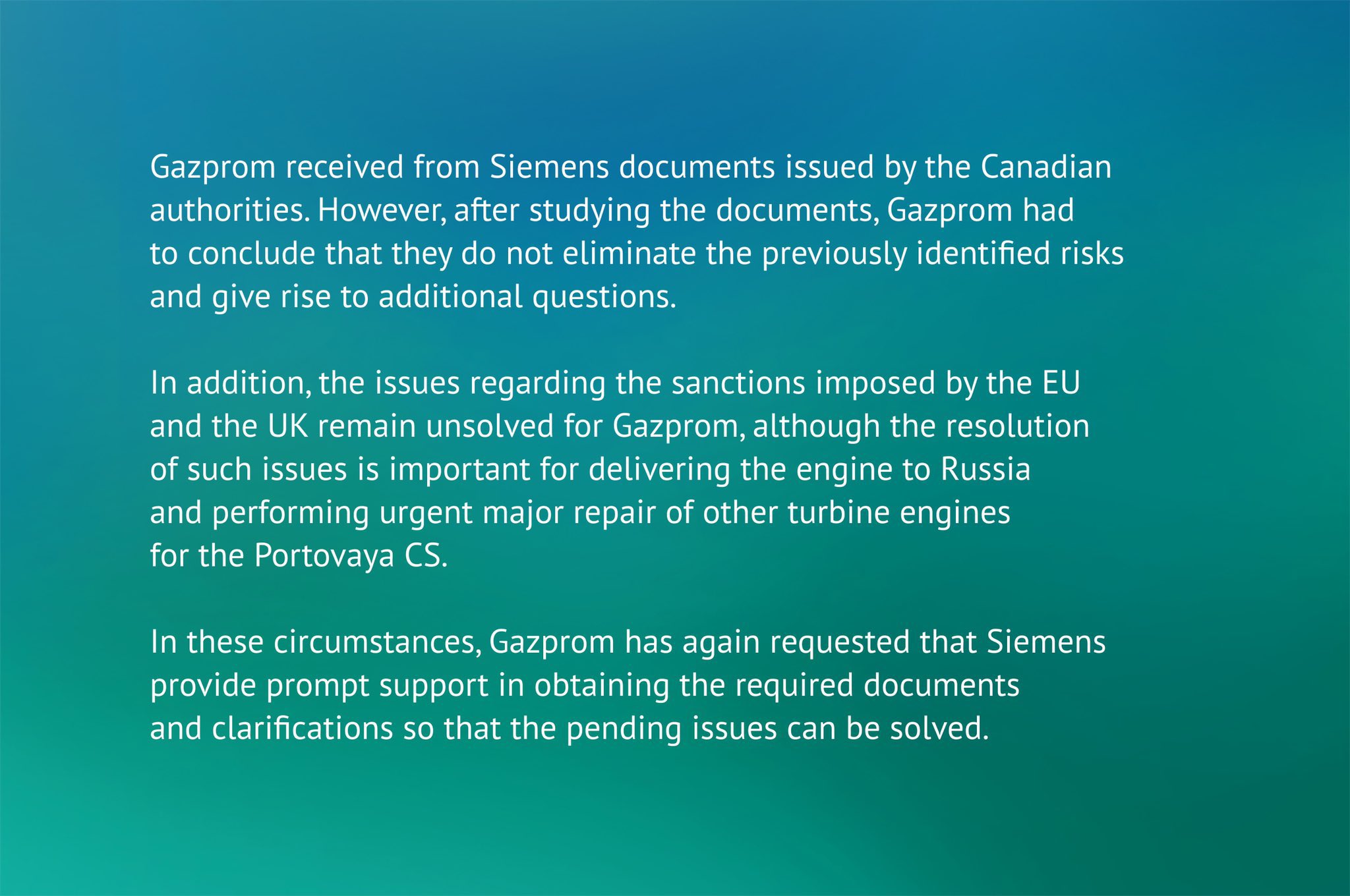 The announcement was immediately followed by a fresh spike in European gas prices, with the TTF August contract hitting over €175 ($179) per MWh at approximately 14:30 GMT, up 9.5% from the average for the previous trading session on July 22.

A rocket attack on Odesa at the weekend only a day after the Istanbul grain deal was signed had a similar effect on wheat future prices, sending them soaring on the exchange in Chicago after the news broke.

The shut down of another compressor will reduce the flows ot The CBR more than doubled interests to 20% on February 28 of the pipeline’s full capacity at time when Europe is scrambling to refill its storage tanks to 80% full by October 1. The pipeline has a nameplate transport capacity of 55 bcm per year, or just over 150 mcm per day.

Currently even at the reduced flows Europe is on track to hit its 80% deadline on October 1, but any further reduction in gas flows could put that goal in jeopardy. Moreover, even with the target met, only two European countries will have enough gas in storage to last the whole winter (Slovakia and Austria). The rest of Europe will continue to rely on gas imports from throughout the cold season.

A number of European gas buyers have already had their Russian supply cut off after refusing to pay in rubles as the Kremlin demanded in late March, and many more are reporting reduced flow since Gazprom began curtailing supply via Nord Stream last month.

The turbine that was sent to Canada for repairs is still stuck in transit in Germany, according to the Moscow-based Kommersant newspaper.