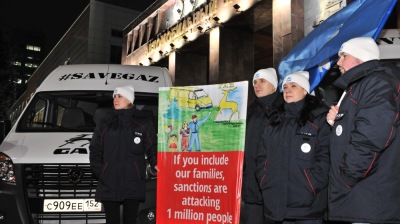 Ten workers from the GAZ automobile factor left for a two week road trip to Germany to raise awareness of the plight of the factory.
By Ben Aris in Berlin November 29, 2019

Ten workers from the GAZ car factory set off from the company’s home town of Nizhny Novgorod on a two week road trip via Belarus, Poland, Czechia and Austria to Germany in a bid to raise awareness of the company’s plight and try to save it from bankruptcy.

Ten workers from the iconic carmaker will drive the GAZelle NEXT light trucks that are one of the plant's best selling products more than 4,000km from Nizhny Novgorod to the German town of Düren, as part of the international #SaveGAZ automobile rally. The group is due to hook up with the IndustriAll Global Union’s Automotive Working Group, which is hosting the Russian workers in a show of solidarity, on December 9-11.

GAZ belongs to Russian tycoon Oleg Deripaska and is under US sanctions that the management claim are pushing the company to the verge of bankruptcy. The plant was included in the April 2018 round of sanctions that personally targeted Deripaska’s assets. Employing over 40,000 workers, if their dependants are included then half a million people and the entire Nizhny Novgorod local economy is reliant on the plant for their livelihoods.

GAZ workers were already in Moscow earlier this year and a group of 50 workers demonstrated outside the US embassy during the July 4 independence day celebrations, to protest against the sanctions on the company.

While the sanctions on his Rusal aluminium producer were removed at the start of this year, as they were found to be unworkable and threatened to send global aluminium prices through the roof, those on GAZ have remained in place. The plant has been on the ropes as a result. Deripaska appealed to the government for RUB30bn ($469mn) support in April, saying tens of thousands of jobs are on the line as the plant is now facing bankruptcy.

Deripaska says he is ready to give up control of the GAZ Group automotive conglomerate and has been in talks on a possible joint venture with Germany’s Volkswagen to get the plant back on its feet, but the deal is stymied until the sanctions are lifted.

The US Treasury has postponed any decision on lifting the sanctions on GAZ several times, most recently extending the deadline to March 31, 2020.

“GAZ today has no real prospects as a result of the shameful and unjust decision to impose sanctions. We cannot grow, we have had to suspend numerous international joint projects, and we are facing painful financial problems,” GAZ Trade Union chairman Sergei Solodov said as the rally set off on its journey.

“If the US Treasury doesn’t lift these sanctions, our factories could shut down overnight. GAZ workers are carrying on without knowing whether they will have a job and be able to feed their children tomorrow. Sanctions jeopardise 40,000 highly skilled jobs, and more than 400,000 people and their families are affected directly and indirectly.”

The workers are hoping to influence lawmakers in the US who have said explicitly that sanctions are not aimed at ordinary Russians, but are supposed to only target the elite around President Vladimir Putin.

And the iconic GAZ plant – the Gorky Automotive Factory, named after the famous revolutionary writer Maxim Gorky – has long-standing ties with the US. Lenin personally founded the plant that was set up with the cooperation of Henry Ford, the father of mass produced automobiles.

Since the collapse of the Soviet Union GAZ has reactivated many of its foreign ties and has partnerships with General Motors and Chrysler, as well as hosting assembly lines for Volkswagen and Daimler on the factory’s territory. However, the future of these partnerships is in doubt and the company is having problems sourcing foreign-made parts that are essential to production.

Evgeny Morozov, chairman of the GAZ Group Workers’ Council, said: “The impact of sanctions is reverberating across the entire automotive industry. All our European partners want to continue working with us, but sanctions mean they are unable to plan any projects. Political disagreements should not destroy long-established and strong economic relationships and take the livelihoods of hundreds of thousands of people hostage.”