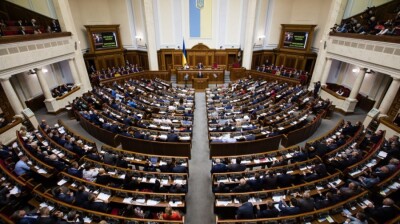 Keen to restart the stand-by deal with the IMF, Ukraine lawmakers have been busy and recently passed a raft of reformist legislation. / wiki
By FPRI BMB Ukraine July 1, 2021

Over the past week, the Ukrainian Parliament has pushed through several pieces of legislation in the final reading, while also approving the second reading of other bills. Meanwhile, President Volodymyr Zelenskiy has signed a few noteworthy laws and decrees. To sum up all of these developments, we’ve put together a timeline.

June 24: Zelenskiy signed a decree extending sanctions and imposing new restrictions on 55 banks and financial institutions in Russia and the occupied territories in Donbas and Crimea. The Ukrainian president also signed decrees introducing sweeping sanctions against hundreds Russian individuals and legal entities, as well as Ukrainian oligarch Dmytro Firtash and businessman Pavlo Fuks. (Interfax-Ukraine reports that companies belonging to Firtash’s Group DF are continuing to operate despite the sanctions).

June 29: Verkhovna Rada lawmakers approved the second reading of a bill giving foreign experts the ability to veto candidates for the High Qualification Commission of Judges. Lawmakers also approved the final reading of the law increasing liability for officials who make false asset declarations. (This comes after Zelenskiy vetoed an earlier version of the bill, as discussed in the June 9 issue of BMB Ukraine). Finally, the parliament approved a bill waiving fines for residents of the occupied territories who enter Ukraine through Russia.

Also on June 29, Zelenskiy signed a law allowing roadworks and airport repairs to bypass the government’s e-procurement system. As pointed out by the Kyiv Post, this means the construction of the $3.5bn “Ring Road” beltway around the capital will be exempt from going through ProZorro.

June 30: The Rada adopted the second reading of a bill on improving corporate governance in banks that’s essential for future co-operation with the IMF. Meanwhile, the parliament’s National Security Committee supported Zelenskiy’s “law on oligarchs” and rejected three alternative bills put forward by the opposition. Voting on the de-oligarchisation bill’s first reading is scheduled for July 1. (For the back story, see these two issues of BMB Ukraine).

Georgia’s border clogged with thousands of Russian fleeing the Kremlin’s mobilisation
Meloni won the elections, but her programme won’t make Italy the next Hungary
More pain stored up for Emerging Europe in 2023