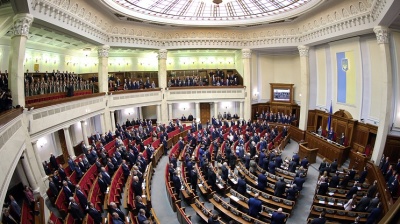 Ukraine's Servant of the People Party kept the most campaign promises but only fulfilled about 15%. Almost all the other parties fulfilled one promise at most.
By FPRI BMB Ukraine September 10, 2020

“It’s clear the parties had different abilities to keep their promises. While Servant of the People, thanks to its mono-majority in Parliament, could introduce the most legislative initiatives and vote without external help, other parties could only join important votes or publicly boycott initiatives that contradicted their promises,” note analysts Oleksandra Panasytska and Anastasia Ivantsova.

As such, compared to the other parties in the Verkhovna Rada, the president’s Servant of the People Party managed to fulfil the largest share of the promises it made during last year’s campaign. That said, "deputies from the Zelenskiy faction realised an average of 10-15% of what was promised.” As Panasytska and Ivantsova underscore, the party stayed in “turbo mode” for the first six months, but not a single campaign promise has been fulfilled since the start of this year.

Looking at the 29 deputies from former president Petro Poroshenko’s European Solidarity Party offers a stark comparison – as it turns out, it’s “the only parliamentary faction that has yet to fulfil any of its campaign promises. The fact is that most of [its] promises concerned continuing reforms and decentralisation, which is more the task of the government than the parliament. And the party has no representatives in the Cabinet,” Panasytska and Ivantsova explain.

At the same time, European Solidarity has worked hard to counter pro-Russian initiatives, which takes us to the 44 lawmakers from the Opposition Platform – For Life, who have only fulfilled one promise: supporting the law on changes to the parliament’s composition and the electoral system.

Yulia Tymoshenko’s Batkivshchyna party (with 24 lawmakers in Parliament) has only fulfilled one promise as well; keeping Ukraine’s gas transportation system under state ownership, which means the 19 lawmakers from the Holos Party have fulfilled the second highest number of campaign promises, by throwing their support behind six key parliamentary initiatives including the confiscation of corrupt assets from civil servants and the return of criminal liability for illegal enrichment, among others.

This article originally appeared in FPRI's BMB Ukraine newsletter. Click here to learn more about BMB  Ukraine and subscribe to the newsletter.

TURKEY INSIGHT: Moody’s warns of autumn peril
13 hours ago
MITTELEUROPEAN INSIGHTS: Better $1.5bn from Russia or €1bn from the EU in the hand than $15-20bn in the bush?
14 hours ago
COMMENT: Ukraine’s the Old Rotten System is alive and well
5 days ago
STOLYPIN: Whatever is happening to Putin?
8 days ago
FPRI BMB Russia: Russian to hold elections in 83 regions
13 days ago