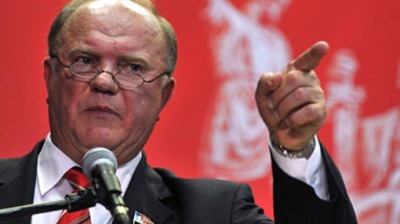 The Communist Party of Russia is torn between the old guard that are in effect aligned with the Kremlin as the "systemic opposition" and the younger progressive guard that want to align with change. Tensions in the party are rising. / wiki
By Fabrice Deprez in Kyiv January 29, 2021

After setting the agenda, Alexey Navalny has forced the Kremlin to adopt a defensive posture – Vladimir Putin’s contrived denial that the Gelendzhik palace belonged to “[him] or any of [his] close relatives” is a small but significant victory for the opposition leader.

But the Kremlin’s position is far from disastrous: the protests were large but not overwhelming in numbers, and Russia’s security services “have clearly learned the lesson of neighbouring Belarus,” Alexander Gabuev accurately notes. Given this context, it’s natural to look towards the “systemic opposition” and particularly its most powerful representative, the Communist Party of the Russia (KPRF), for potential cracks in the system.

The protests in support of Navalny served to highlight once again the quiet debate raging within the KPRF between the old guard and younger, more progressive elements. While the KPRF’s long-standing leader Gennady Zyuganov denounced an attempt by the West to stir up a “colour revolution” in Russia, former governor of the Irkutsk region Sergey Levchenko supported the protests. The party itself tried to walk the fine line between its overall allegiance to the Kremlin and its official opposition status: on Instagram, 33-year-old communist MP Denis Parfyonov encouraged people to participate in the January 23, KPRF-sanctioned protest in Moscow, adding that “the most repressed in Russia is not Navalny's liberal opposition, but left-wing forces.”

Not everyone is buying this, however, with many rank-and-files and local communist leaders supporting Navalny’s cause (though not Navalny himself). As Zyuganov’s grip on the party weakens, could this dissent boil over and trigger a rebalancing of Russia’s politics? In the long term, maybe. But the presidential administration is acutely aware of those debates; given current protests and the upcoming Duma elections, the Kremlin will do whatever is necessary to keep the party in line.

COMMENT: The new Cold War will be different, and not only because of China
3 hours ago
PANNIER: Uzbeks, Kyrgyz cooperating to level unthinkable 10 years ago
6 days ago
PANNIER: A very Turkmen coup
10 days ago
OPINION: Bulgaria sets itself a tough task with Burgas-Alexandroupolis pipeline revival
14 days ago
NEMETHY: Is Ukraine War the beginning of World War III?
14 days ago