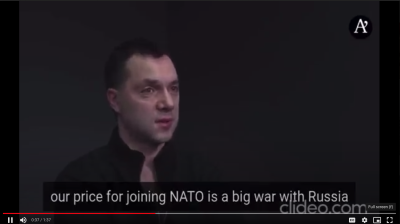 Oleksiy Arestovych, advisor to the Ukrainian president Volodymyr Zelenskiy predicted the war with Russia with stunning accuracy two years before it happened / wiki
By Cameron Jones in Kyiv March 16, 2022

In 2019 Oleksiy Arestovych, advisor to the Office of Ukrainian president Volodymyr Zelenskiy, eerily predicted, with stunning accuracy, how events in Ukraine would unfold in 2022.

In an interview with Ukrainian news channel "Apostrophe.ua," Arestovych believed that Nato accession was Ukraine's only hope of securing its independence. "If we don't join Nato, it's gonna be absorption by Russia within 10-12 years," he said.

However, the choice was not simple and Ukraine has found itself stuck between a rock and a hard place, while also stating that any talk of Ukrainian accession to Nato would "provoke Russia to launch a large-scale military operation against Ukraine." Ukraine's price for joining Nato, he said, would be large-scale war with Russia.

Arestovych believed that Russia would have the goal of degrading Ukrainian infrastructure and turning the country into a "devastated territory" in order to make the territory of Ukraine "uninteresting" to Nato. Russia would seek to destroy as much of Ukraine as it could prior to it being accepted into Nato, due to Russia not wanting to confront Nato directly, Arestovych said. Ukraine becomes "uninteresting to Nato as a devastated territory," he said.

Arestovych predicted that a large-scale Russian invasion that ended with Russia's defeat and was followed by Ukraine entering Nato would be the best option and one that would secure Ukraine's independence.

Perhaps most spooky of all, however, was the almost pinpoint accuracy with which Arestovych predicted the nature of Russia's attack. He described an air offensive, followed by invasions from the four separate armies Russia had created on Ukraine's borders. The invasions would involve a siege of Kyiv, an encirclement of Ukraine's forces in Donbas, an advance out of Crimea aimed at securing the peninsula's water supply and another assault from the territory of Belarus. He believed Russia would seek to create other "people's republics" like those in Donetsk and Luhansk throughout Ukraine.

In 2019 Arestovych believed the possibility of the invasion was "99.9%." He said that the "period between 2020-2022 was the most critical" for the inevitable Russian assault on Ukraine.