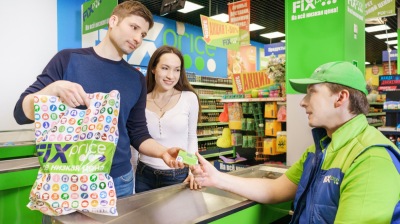 In a world of booming online sales, Russia's hard discounter is one of the fastest growing retailer businesses in the world. Ironically it is the stagnation of Russian real incomes that is the engine of its growth.
By Ben Aris in Berlin June 23, 2021

The coronavirus (COVID-19) infection rate began to soar again in the middle of June, as only 12% of the Russian population have bothered to get inoculated due to widespread distrust of the authorities and a generally very Russian blasé attitude to the virus.

But the soaring numbers began to distress the authorities and Moscow Mayor Sergey Sobyanin for the second time took the difficult decision first to put the capital on lockdown and then even more controversially, a week later he ordered mandatory vaccinations for service sector workers.

As bne IntelliNews reported, the first lockdown in April knocked the bottom out of the retail business, as highlighted by the collapse in the Watcom foot traffic index, but the business of Fix Price, Russia’s leading variety value retailer, has found itself to be relatively immune to lockdowns, CFO Anton Makhnev told bne IntelliNews in an exclusive interview.

“We did not suffer in the previous lockdown. People are generally getting used to the new restrictions and rapidly go back to their old shopping habits. On balance, there was no big impact,” says CFO Anton Makhnev. “We do not know how long it will last but based on what has been announced we don't really expect there to be much of an impact from this lockdown.”

Makhnev says that factors like the exchange rate and inflation have had more of an effect on the business than the pandemic.

Russia’s economy has weathered the storm of the last year better than expected and the bounce back has been stronger than anyone expected. However, the Russian economy faces two persistent problems: stubbornly high inflation and stagnant real incomes.

The irony of Fix Price’s business is the company has done so well precisely because real incomes have been stagnating, which has made shoppers even more conscious of costs than ever before.

“Russian real disposable incomes have been stagnating and even falling, which coupled with inflation has put incremental pressure on the consumer,” says Makhnev. “Luckily we are in an extremely strong position, as we are the only Russian retailer with the EDLP (everyday low prices) business model and we have been able to maintain a price advantage on all our competitors, even the e-commerce players. We are helping the Russian consumer to save as their incomes come under pressure.”

One of the keys to Fix Price's success is its ability to undercut all the competition and maintain a discount on its goods against all its competition. At the same time, as all its goods are uniquely produced and presented for the chain, it is also protected from the “commoditisation” of retail goods that is the basis of the e-commerce business.

“We buy a relatively narrow range of goods so within that we have the volume to be able to influence the price,” says Makhnev. “And our team of category managers are experts in developing new products. They go deep into the cost of the goods and find a product that is attractive and has consumer appeal, but at the same time is cost-effective and has the kind of margin that we need for our model.”

Fix Price develops all its own products and increasingly has them made by Russia’s rapidly developing light manufacturing sector. Even the branded generic goods it offers are repackaged and offered at a discount to other outlets.

The economic crises of 2014 and 2020 and the deep devaluations they brought have only made the conditions for Russia’s light manufacturing sector better as Russian wages fall below even those of China in dollar terms. It means that companies like Fix Price are sourcing more and more of their products from domestic manufacturers.

“In 2014 we imported about half of our goods from abroad – mostly China,” says Makhnev. “But today that has fallen to 25% and with the changes in the exchange rate it will likely fall even further, to be replaced by domestic production.”

The uniqueness of its in-store branded goods means it has insulated itself from the competition. If a shopper finds a flash TV they want after spending hours in an offline electronics store talking with the assistant there is nothing to stop the punter going home and searching for the product amongst the various retailers and choosing the cheapest of all the offers online. Fix Price’s goods are only available at Fix Price stores and they are supposed to be the cheapest alternative anyway.

That is not to say the company is ignoring the booming e-commerce business, where a gold rush has started to grab as many users as possible, as fast as possible.

“Those guys are spending huge amounts of investors’ money to grab as much traffic as they can. And you can see why: at the end the winner will have 70% of the market, the number two will have 20% and rest will get next to nothing. Only a few leaders will survive,” says Makhnev.

Again with its emphasis on the bricks and mortar stores and its unique products, Fix Price is outside this gold rush. Part of the big reason shoppers go to Fix Price stores is to stock up on very cheap staples, but also for the “treasure hunt” experience – stumbling across a special offer that is irresistibly attractive and affordable they buy on a whim – an experience that doesn't really translate to online shopping.

“We feel like we are standing on the sidelines watching this race progress. And most of those companies are spending huge amounts of money. And most of them are working at a loss,” says Makhnev. “But that is the nature of that business, as the rewards are equally big. We are watching closely and we will adopt the best practices that emerge in a low-key and low-cost way eventually. It is highly unlikely that online sales will ever be a core part of our business, but we feel we need to master the best elements.”

The main thrust of Fix Price strategy going forward is to continue rolling out new standardised stores that can pay back on their investment in one year and grow like-for-like (LfL) sales, says Makhneov.

The company IPO’d in March this year, raising $1.8bn for its investors and giving the company a market valuation of $8.3bn in what was the biggest Russian IPO since 2012. Shares were sold by Fix Price’s founders, Artyom Khachatryan and Sergei Lomakin, as well as the Marathon Group of Alexander Vinokurov and Sergei Zakharov, along with Goldman Sachs, which was also a shareholder.

The shareholders are hoping to tap into the company’s cash-rich business model, as management has pledged to pay at least 50% of net profit in dividends.

“Ours is a cash-generative business and we have more than enough cash to fund our capex needs,” says Makhnev. “The company has promised to pay dividends biannually. And if there is surplus cash the board also has the power to pay out extraordinary dividends too.”

And business has been going well. The company remains the fastest growing variety value retailer in the world globally, showing a 29.2% year-on-year increase in revenues in 1Q21 on the back of an 11.9% gain in LfL sales and 19.4% increase in selling space. LfL sales went up due to higher average ticket growth (+15.2% y/y) and despite lower LfL traffic (-2.9% y/y) – and all that before the pandemic has ended.

And the analysts are bullish on the company’s long-term prospects. In April VTB Capital (VTBC) argued that Fix Price is set to more than triple in the next five years, from 2020 sales of RUB190bn ($2.5bn) and net income of RUB17.5bn.

The company is the absolute leader on the Russian variety value retail market, with a 93% market share, as the other major retailers have ignored the hard discount niche for far too long and now have a lot of catching up to do. In a world of growing online sales Fix Price has found itself in the unusual position of being the bricks and mortar retail business that is disrupting the established and online vendors.