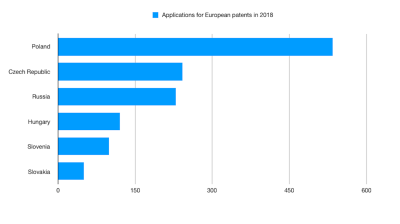 Applications for European patents from firms based in Central and East European countries.
By Clare Nuttall in Glasgow March 13, 2019

Patent applications to the European Patent Office (EPO) from its members in Central and Eastern Europe (CEE) rose strongly in 2018, though in absolute terms they still lag the number of applications from Western Europe, the US and Far Eastern manufacturing hubs.

Countries from the region have become important manufacturing destinations for international firms, including in the automotive and components industry, thanks to their skilled workforces and relatively low costs. However, there are also a growing number of homegrown tech and manufacturing companies in the region.

The growth in applications from Poland (+19.7%) and the Czech Republic (+17.5%), the top two sources of patent applications from the CEE region, outstripped the overall growth of 4.6%, the EPO’s 2018 Annual Report shows.

Poland was, however, in 25th place overall in terms of the number of patent applications, just 354 compared to tens of thousands from the US, Germany and Japan, which topped the table. The Czech Republic was slightly lower on the table in 33rd place with 242 patents.

In total, companies and inventors from all over the world filed 174,317 patent applications with the EPO in 2018, the report said, while the EPO published 127,625 granted a record European patents during the year, up 21% y/y.

“The growth in applications across the majority of leading technology sectors is proof that European innovation can rely on a competitive and effective patent system. Innovative companies need a robust patent system so they can build strong patent portfolios,” commented EPO president António Campinos.

“In the EU alone, industries with a high use of patents, trademarks and registered designs employ around 60 million people, accounting for 42% of its economic turnover and over 90% of its external trade. This greatly supports our economy.”

By company, Germany’s Siemens was the top patent applicant at the EPO in 2018, filing 2,493 European patent application. Siemens was followed by Chinese technology firm Huawei, but three other European firms — Royal Philips, Ericsson and Robert Bosch — were also included among the top 10.