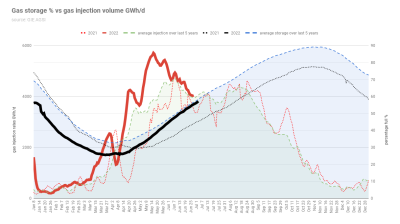 Europe's gas tanks are 58% full and even after Russia cut flows in mid-June they are still on track to reach the 80% full by October 1 target set by Brussels at the start of this year, unless Gazprom cuts back flows further. / bne IntelliNews
By bne IntelliNews June 29, 2022

Fears that the EU will face another gas crisis this winter were raised after Russia’s state-owned gas giant Gazprom reduced flows of gas to Europe by 60% in mid-June in what many claimed was a political attack and a renewal of last year’s “gas wars.”

Germany was particularly alarmed as it remains by far the most exposed to Russian gas deliveries. Germany imports the most gas from Russia directly via the Soviet era pipeline network and, as it has no LNG terminals, it has few options to find alternative sources should Russia cut off gas supplies completely.

German Economy Minister Robert Habeck accused Russia of an “attack” and said Gazprom was cutting supplies for “political reasons” in a speech on June 21. He also put Germany on an energy “alert”, the second in the three stages of energy warnings established by the EU in 2017, and ordered coal-fired power stations to be readied in case of an emergency.

Other EU members are less alarmed. Another 12 EU countries have also triggered the warning system, but they remain at the “early warning” stage, when a problem is anticipated but no action is yet required. The final “emergency” stage allows governments to take control of energy supplies directly and introduce a rationing system for what fuel supplies are available.

As the chart shows, the injection rate (red) has fallen dramatically in the last month, but that follows record-high rates of injection since February. Europe’s tanks have been replenished this year much faster than in previous years and well ahead of the five-year average rate (green dashed) as well as ahead of the injection rate in 2021 (red dotted). The current replenishment rate is still on a par with the five-year average, even after Gazprom reduced the rate of flows in mid-June.

The comparison with 2021 is an important benchmark as that year marked a full-blown gas crisis and Europe started the gas season with tanks only 77.3% full – the first time in a decade that the heating season started with tanks less than 80% full. If the current measure of the percentage tanks are full (black) falls back to the 2021 rate (black dotted) in the coming months then another gas crisis is almost certain.

Replenishment rates have been boosted by record deliveries of LNG, from the US in particular, which is beyond Gazprom’s control. That meant that the tanks were 50% full ahead of schedule on June 17 (black), ahead of where they were in 2021 (black dotted) and on a par with the five-year average (blue dash).

The injection rate has fallen precipitously in the last two weeks and is currently running at half the rate of previous months, but given the historically high injection rates earlier this year, there is more wiggle room and Europe is still on track to reach the 80% full target set by Brussels at the start of this year, which currently will be met on September 30 at current filling rates.

Gas deliveries will probably continue at a slower pace as Gazprom claims that its main pipeline, Nord Stream 1, is working at reduced rates after Siemens was unable to return compression equipment sent for repairs, due to sanctions.

Another maintenance reduction is scheduled for the end of July when Nord Stream 1 is taken offline completely for a week for its annual check-up.

However, some of the reduction from the recent hiccup will be made back after TurkStream, which supplies gas to south-eastern Europe, was put back into action this week, after flows were temporarily suspended, also due to technical problems. Nord Stream 1 supplies about 55bn cubic metres per year and TurkStream some 31 bcm per year of gas out of the 155 bcm Russia sent to Europe last year.

With supplies from Norway and the Netherlands, many countries are already in a position to get through the winter. In Poland, Portugal and the UK tanks are already full and from October 1 a new pipeline will connect Poland to Norway, making it the first European country to totally shear itself of dependence on Russian gas. That leaves Germany and Italy as the most exposed to Russian gas, where tanks are 60.53% and 57.22% full respectively as of June 26.

At the end of July 240,706 Czechs were seeking employment through Czech authorities, Czech Labour Office’s latest data show. This figure is 9,397 more people than previous month translating to a rise of 0.2% and 3.3% unemployment rate. (chart)

High import prices of food and energy are now spilling over into the prices of other products and services.

BNR says it expects no further rise in inflation over the coming two quarters and is concerned about the economic stagnation in the second and third quarters of 2022.