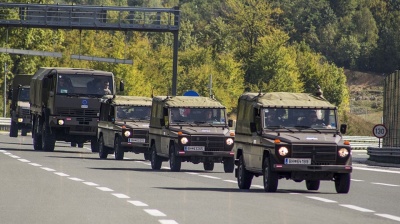 EUFOR is boosting its presence in Bosnia as a precautionary measure. / EUFOR
By bne IntelliNews February 25, 2022

The European Union Force Bosnia and Herzegovina (EUFOR) announced on February 24 it is boosting its presence in Bosnia as a precautionary measure.

“The deterioration of the security situation internationally has the potential to spread instability to Bosnia & Herzegovina,” said EUFOR in a statement.

However, EUFOR added that its “assessment is that there is currently no threat to the safe and secure environment that would require EUFOR's support. The situation is being continually monitored and further reinforcements can be brought in if necessary.”

Four companies, comprising approximately 500 personnel from EUFOR’s reserves stationed outside of Bosnia & Herzegovina will be deployed, as a precautionary measure, in Bosnia over the next two weeks to reinforce existing forces, EUFOR said.

The companies that will soon be deployed will bring the total number of EUFOR forces stationed in Bosnia up to 1,100. These personnel will come from Austria, Bulgaria, Romania and Slovakia.

The deployment of these forces is a precautionary measure to strengthen stability in Bosnia by positioning sufficient, capable forces in-country to support the Bosnian government efforts to maintain a safe and secure environment.

EUFOR has been deployed in Bosnia since 2004. It comprises a total of approximately 3,500 personnel of which 600 are currently deployed in country.

The political situation in Bosnia has worsened in recent months after the parliament of the country’s BosnianSerb entity Republika Srpska voted in 2020 to withdraw from the Bosnian army and other state-level institutions.

On February 21, EU High Representative Josep Borrell urged EU foreign affairs ministers not to ignore Bosnia amid the current focus on the situation in Ukraine. “Do not dismiss the importance of what is happening in Bosnia & Herzegovina. It is going to take an important part of our meeting today, because the nationalist and separatist rhetoric is increasing in Bosnia & Herzegovina and jeopardising the stability and even the integrity of the country,” he said.

The Russian invasion of Ukraine has raised fears about a potential worsening of the security situation in the Western Balkans, where Dodik frequently looks to Russian President Vladimir Putin for support. Another potential flashpoint is Kosovo, where Moscow backs Serbia in its insistence that Kosovo not be recognised as an independent state.

A comment by Dimitar Bechev for Carnegie Europe published on February 26 predicts that Russia will further stir up polarisation and misinformation in the region. While Bechev doesn’t expect Russia to take military action in the region, he wrote: “There are more cost-effective ways to stir up trouble than by sending in the paratroopers, with all the attendant political risks. Russia will do more of the same: support Republika Srpska’s Milorad Dodik, nurture links with Serbian President Aleksandar Vučić, and back anti-Western politicians and parties elsewhere in the region. In short, Moscow will wage its political war as before.”