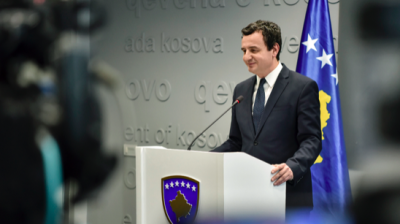 Kosovan Prime Minister Albin Kurti's announcement that Pristina will lift tariffs on raw materials imported from Serbia and Bosnia & Herzegovina met with very different responses from the EU and US.

Kurti announced on February 27 that the country will partially and conditionally remove the 100% tariffs imposed on goods imported from Serbia and Bosnia starting from March 15. The tariffs were imposed by the previous government led by Ramush Haradinaj in November 2018 for political reasons. Kosovo declared independence from Serbia in 2008, but it is still not recognised as a separate country by Belgrade.

The EU welcomed Kurti's announcement as a first step towards restoring trade links with the two countries.

This step could have a positive effect on restoring regional trade and offer an opening for the resumption of the dialogue between Belgrade and Pristina facilitated by the European Union, the EU’s diplomatic service said on February 28.

The statement said that the EU high representative Josep Borrell stands ready to play his role as the facilitator of the dialogue on behalf of the EU.

A day earlier, the US president's special envoy for Serbia and Kosovo Richard Grenell said in a tweet that the US does not support Kurti’s half measure.

"Our position is quite clear: the tariffs must be completely dropped. Kurti is making a serious mistake — and that was made clear to [Kosovan] President [Hashim] Thaci at the White House," Grenell said in a tweet.

According to Grenell, the tariffs must be removed completely and immediately.