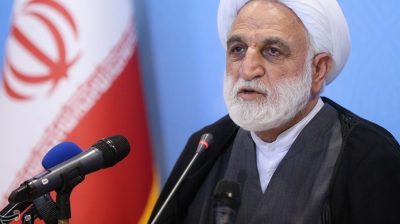 The European Union and UK are attempting to strike at the heart of Iranian power structures with additional sanctions slapped on Tehran in response to its often bloody crackdown on anti-regime protesters.

The announcements of the EU sanctions and UK sanctions, on November 14, came on the same day that a court in the Islamic Republic issued the first death sentence to a person arrested for taking part in the protests that have engulfed the country for nearly two months. A Revolutionary Court in Tehran determined that the defendant, who was not named, had set fire to a government facility and was guilty of "enmity against God".

French President Emmanuel Macron, meanwhile, added to pressure on the Iranian regime by characterising the protests as a “revolution”. "Something unprecedented is happening," France's Emmanuel Macron told France Inter radio. "The grandchildren of the [1979] revolution are carrying out a revolution and are devouring it."

The EU’s new sanctions on Iran were meant "to send a clear message to those who think they can suppress, intimidate and kill their own people without consequences," Reuters reported German Foreign Minister Annalena Baerbock as telling reporters as she arrived for a meeting with her EU counterparts in Brussels. "They cannot," she added. "The world, Europe is watching."

British Foreign Secretary James Cleverly announced that the UK had designated Iranian Communications Minister Issa Zarepour and a range of local law enforcement and Islamic Revolutionary Guard Corps (IRGC) officials who have been involved in, and ordered, the crackdown on the protests.

Zarepour and Vahid Mohammad Naser Majid, chief of Iran’s Cyber Police, “were designated for shutting down the internet in Iran, including disabling Whatsapp and Instagram, and banning the use of the Google Play app and virtual private networks (VPNs)”, .

The protests, ignited in mid-September by the death of Mahsa Amini death in “morality” police custody after her detention on a Tehran street for "inappropriate attire", have turned into a legitimacy crisis for Iran’s clerical establishment.

The European Union’s new sanctions target 29 individuals and three organisations. Among those sanctioned with travel bans and asset freezes were Iranian Interior Minister Ahmad Vahidi, four members of the police squad that arrested Amini and high-ranking members of the IRGC, the elite force charged with protecting the Shi’ite clerical ruling system.

The Human Rights Activists News Agency (HRANA) said on November 14 that it was aware of 341 protesters who had been killed in the unrest, including 52 minors. It added that 39 members of the security forces had also been killed, while as of November 13 more than 15,820 people had been arrested in protests in 140 cities and towns and 138 universities.

Iran has accused foes including the US, Israel and Saudi Arabia of fomenting “riots”.

In the Iranian court system, at least 20 people arrested for participating in the unrest were currently facing charges punishable by death, Norway-based Iran Human Rights said, citing official reports. It warned that the authorities might be planning "hasty executions".

Last week, judiciary chief Gholamhossein Mohseni Ejei declared that "key perpetrators" of the protesters should be identified as soon as possible and given sentences that would deter others from taking part in the protests.

He warned that "rioters" could be charged with "moharebeh" (enmity against God), "efsad fil-arz" (corruption on Earth) and "baghy" (armed rebellion). All of these offences under Iranian Sharia-based law can carry the death penalty.