EU to put Poland, Hungary and Czechia in dock for rejecting asylum seekers 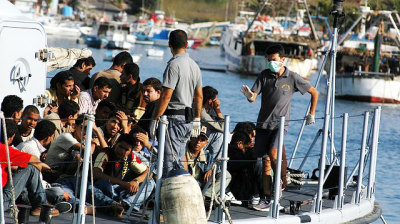 Migrants arriving on the Italian island of Lampedusa.
By bne IntelliNews December 7, 2017

The European Commission is to sue Poland, Hungary and the Czech Republic at the European Court of Justice (ECJ) for refusing to take in asylum seekers as part of a relocation plan launched by the EU two years ago, it announced on December 12.

The three members of the Visegrad Four political and cultural alliance are accused by the EU's executive body of "non-compliance with their legal obligations on relocation" and the ECJ could impose heavy fines. The government of the fourth Visegrad member, Slovakia, largely abandoned its previously bitter anti-immigration stance after the general election held in March 2016, reassuring citizens that it remained determined to resist large-scale immigration, while pursuing the major goal of ensuring the country remains part of ‘core’ Europe. Poland and Hungary have aggressively fought the migrant quotas demanded by the relocation scheme, while euroscepticism and anti-migrant campaigns helped the populist ‘anti-politician’ Ano movement sweep to a major victory in the October general election in the Czech Republic.

The relocation plan, introduced by the EU in response to a huge influx of mainly-Muslim migrants and refugees heading north to the European continent, was formulated to ease the pressure on Greece and Italy where the vast majority of migrants were arriving. However, the Czech Republic has since agreed to shelter only 12 of the 2,000 asylum-seekers for which it was designated, while Hungary and Poland have received none. In all, the scheme seeks to relocate 160,000 asylum seekers according to quotas in line with the size and wealth of each EU member state. But the Visegrad nations have protested that the predominantly Muslim refugees have no place in their homogeneous, mainly Christian societies.

Playing into the hands of the far right
The leader of the Czech Ano party, populist billionaire Andrej Babis—who was sworn in as prime minister on December 6 but may have to rely on the support of communists and neo-fascists to keep a minority government in office—told the BBC on December 7 that his country would continue to oppose the relocation scheme. He said the quota system had fuelled anti-migrant sentiment and played into the hands of the far right, an observation his critics might make mischief with given that Babis may soon be relying on votes from the far right in parliament in order to push through legislation.

Czech press agency CTK quoted Babis as saying that the system to relocate the refugees is "nonsense" and that he would ask the bloc to withdraw its legal action.

Babis says he wants to see the migration crisis addressed with a strategy aimed at going after human traffickers. He has announced that his first step on the international level as PM will be to provide CZK200mn (€7.8mn) to tackling the migration situation in Libya as part of a joint Visegrad initiative. The move looks like an attempt to demonstrate to Brussels that he is willing to help manage the migration dilemma.

Poles talk of “providing public safety”
Poland's Deputy Foreign Minister Konrad Szymanski responded to the news of the ECJ suit by telling Polish state news agency PAP that his government was “ready to defend its position in the court". He added: “No one will lift the duty of providing public safety from the Polish government.”

The government of Poland’s populist national conservative Law and Justice (PiS) has cited security concerns given deadly Islamist attacks in Western Europe. There are problems ascertaining the real identities of migrants, it also protests.

Underlining Poland’s own policy of supporting programmes that target the difficulties posed by mass migration at source, the Polish foreign ministry said it had signed a deal with the European Investment Bank to give €50mn to help countries and territories impacted by the migration crisis. The main recipients are to be Lebanon, Jordan and the West Bank. Foreign Minister Witold Waszczykowski has said that Poland is already hosting migrants as in the past year alone it has awarded more than a million work permits to people from neighbouring Ukraine.

Hungary gets two invitations to court
The third country that will find itself in the dock over migrants, Hungary, was also informed on December 7 that the European Commission would be suing it over laws targeting foreign NGOs and a university founded by the US billionaire and Hungarian-born financier George Soros. Hungary’s populist national conservative government has aggressively targeted Soros as a liberal political activist who would expose Hungarians to intolerable levels of migration. Soros has lately hit back at Budapest’s smear campaign.

At a press conference in Brussels on December 7, Hungarian Minister of Foreign Affairs and Trade Peter Szijjarto said the EU’s mandatory resettlement quotas are impossible to implement. He added that they are clearly unreasonable and amount to a violation of EU rules. Budapest would defend its position before the ECJ, he said.

“Hungary is in a major dispute with the European Parliament’s Committee on Civil Liberties, Justice and Home Affairs (LIBE) with relation to illegal immigration, which is a key determining issue from the perspective of the continent’s future,” the minister was quoted as saying by Hungarian government website kormany.hu.

In early September, Szijjarto accused the ECJ of waving through a political "rape of European law and values" by rejecting a challenge from Hungary and Slovakia to Brussels’ compulsory migrant relocation deal.