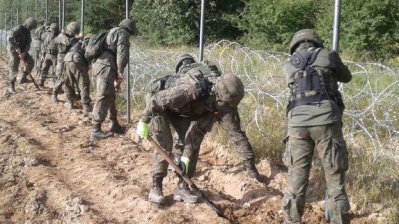 Polish soldiers at the border fence with Belarus.
By Wojciech Kosc in Warsaw November 16, 2021

EU foreign ministers agreed on November 15 that they would step up sanctions targeting Belarus for its role in the ongoing migration crisis on the border with Poland and Lithuania.

Minister are expected to approve sanctions for airlines, travel agencies and officials linked to migrant trafficking to Belarus, EU foreign policy chief Josep Borrell said on the eve of the meeting. A list of people and entities to be hit by asset freezes and travel bans is expected to be finalised in the coming weeks. It will include “people, airlines, travel agencies and everyone involved in this illegal push of migrants against our borders,” Borrell said, The Guardian reported

Poland has seen a surge in attempts at crossing its border from Belarus as the authorities in Minsk allow migrants to fly in from the Middle East and travel to the Polish border. Warsaw says that the operation by Belarus is “hybrid war” overseen by Russia with the aim of sowing chaos in Poland and the EU using the politically divisive issue of migration.

The new sanctions add to the sanction regime already in place that the EU imposed on Belarus after its autocratic leader Alexander Lukashenka rigged the presidential election last year. Orchestrating a migration crisis is widely seen as Lukashenka’s retaliation for the sanctions.

“The Council [of foreign ministers] today amended its sanctions regime in view of the situation at the EU’s border with Belarus, so as to be able to respond to the instrumentalisation of human beings carried out by the Belarus regime for political purposes,” the official communiqué said.

“We will toughen sanctions on individuals who are involved in this human trafficking, and we will have to talk about the fact that severe economic sanctions are inevitable ... We will have to tackle the airlines, too,” Germany’s EU Minister Haiko Maas told reporters, according to Reuters.

President Lukashenko has vowed to retaliate. “They’re scaring us with sanctions,” he told officials on Monday. “We will defend ourselves. We can not retreat.”

At the same time, Lukashenka seemed to have hinted at a possible winding down of the crisis.

Lukashenka said that Belarus “was working on repatriating the migrants, mostly from the Middle East, who are stuck at Belarus's border with EU member Poland,” AFP wrote based on a report by the Belarusian state-owned newswire Belta.

"Active work is underway in this area, to convince people - please, return home. But nobody wants to go back," Lukashenka said in what may be seen as a pretext to keep the crisis going.

The influx of new migrants at the border may at least stop or lessen for now after the Belarusian state airline Belavia said last week that – on request by Turkey – it would stop boarding citizens of Iraq, Syria, and Yemen on flights along the Turkey-Belarus route. The EU also pushed Turkish Airlines and Russia’s Aeroflot to do the same.