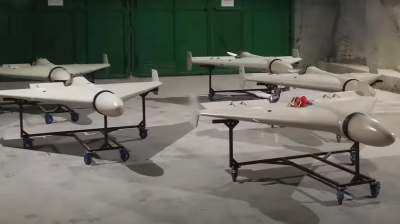 The European Union looks set to hit Tehran with sanctions after a day that saw Russia dive-bombing the Ukrainian capital, Kyiv, and several regions with what appeared to be Iranian-made "kamikaze" drones.

The French and German foreign ministers were among EU top diplomats who called for new sanctions against Iran for supplying drones to Russia. EU foreign policy chief Josep Borrell said the bloc would now look for hard evidence of Tehran's participation in the conflict.

Amid reports that Iran may have supplied Russia with as many as 2,500 military drones and a US/Allies intelligence assessment that the Iranians have agreed to provide Vladimir Putin with surface-to-surface missiles. Tehran on October 17 Iran remained adamant that it had not provided Russia with drones to use in Ukraine.

“The published news about Iran providing Russia with drones has political ambitions and it is circulated by Western sources. We have not provided weaponry to any side of the countries at war,” Iranian foreign ministry spokesperson Nasser Kanaani said. On October 15, Iran’s foreign minister, Hossein Amir-Abdollahian, said the country “has not and will not provide any weapon to be used in the war in Ukraine”.

However, on October 17, Kyiv shook to the rattle of gunfire as anti-aircraft batteries desperately tried to shoot down drones that military analysts feel sure are Iranian Shahed-136s, namely white, V-shaped drones that carry payloads of up to 30 kilograms of explosives. The Kremlin has not commented on where it acquired the drones.

The low buzzing of the slow-moving “kamikaze” drones is becoming familiar to Ukrainians. Some Ukrainians, with black humour, have started referring to them as “the flying lawnmowers of death”. According to some eyewitnesses, as the drone approaches its buzz starts to sound more like the clamour of a noisy moped engine. The consequences of a hit, of course, can be tragic. At least eight people were killed, four in Kyiv and four in Sumy, on October 17 as a consequence of drone strikes.

The Monday attack started at around 06:30 local time, with 28 drones targeting the capital but only five hitting targets, according to Kyiv’s Mayor, Vitaliy Klitschko.

Later in the day, as he arrived at a meeting of EU foreign ministers in Luxembourg, Denmark's Foreign Minister Jeppe Kofod was reported by Reuters as saying: "Iranian drones are used apparently to attack in the middle of Kyiv, this is an atrocity."

Britain, meanwhile, joined France in assessing the Iranian supply of armed drones to Russia for use in Ukraine as a breach of Iran’s obligations under the 2015 nuclear deal, or JCPOA.

Although a ban on Iranian arms exports expired in 2020, the JCPOA retains a ban on any activity related to ballistic missiles until 2023. France the UK said Iran, in providing drones to the Kremlin, was in breach of obligations under parts of the nuclear deal and the missile technology control regime that limits the proliferation of missiles. The West can “snapback” on some sanctions if it asserts Iran is breaching the JCPOA.