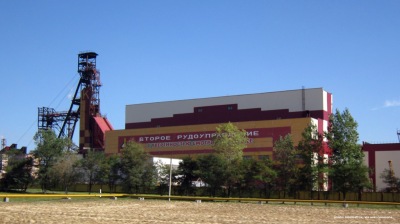 The Soligorsk potash mine in Belarus. photo: Homoatrox via wiki commons / wiki
By Ben Aris in Berlin June 28, 2021

The EU pulled some of its punches when imposing harsh sectorial sanctions on Belarus at a summit in Brussels on June 24-25.

The EU agreed on a deal to impose sectorial sanctions on the pariah nation after it forced a commercial Ryanair flight to land in Minsk and arrested top opposition blogger Roman Protasevich on May 23.

The sanctions target some of Belarus’ biggest foreign exchange earners, including its potash fertiliser exports and refined oil products. Trading and investing in Belarus’ Eurobonds have also been embargoed.

However, the sanctions are less tough than first feared. Lithuanian Foreign Minister Gabrielius Landsbergis says European Union sanctions on the Belarusian fertiliser sector will be imposed in stages, Belsat reported on June 25.

“Obviously, the introduction of sanctions will be step by step, so as not to affect the entire sector at once,” Landsbergis told DELFI as cited by Belsat.

The list of products that Belarus is forbidden to export through the EU will gradually expand. The final form of the sanctions remains vague, as Landsbergis says the details are still being debated and no final agreement has been concluded.

“The #EU seems to have pulled back at the last moment – one of the main potash grades is unaffected by #Belarus’ sanctions, which will not hit Belarus at least until the end of the year or possibly longer,” Belarus analyst with CEPA Katia Gold tweeted.

Several more key goods were not included in this round of sanctions, according to reports, including diesel, gasoline and potassium chloride, a fertiliser.

One of Belarus’ biggest foreign exchange export products, potash, is missing from the list. Belarus is one of the biggest potash producers in the world with a 20% share of the global market, an important fertiliser widely used in the EU, which accounts for some 20% of the country’s budget revenue.

The potash is produced by Belaruskali and exported by the Belarus Potash Company (BPC), which has been named in the EU sanctions list. The potash is mainly exported all over the world from the Baltic port of Klaipeda in EU-member Lithuania that earns some €14mn a year from a transport contract that runs until 2023 and is 30% owned by Belaruskali.

There are various grades of potash, but the most important one that makes up 80% of the exports, potash with 60% potassium content, is not on the EU’s list of sanctioned items, say analysts as cited by Reuters.

The new sanctions imposed on Belarus potash put limits on only about 20% of exports of the product transported via Lithuania, the head of Lithuanian Railways said on June 25.

About 11mn tonnes of Belarus potash crossed the Lithuanian border last year, but only 2.5mn tonnes of that will be subject to the new sanctions, reports Reuters. What has been sanctioned is potash with a potassium content of less than 40%, or more than 62% in the dry product. The key product of potash with a 40-62% potassium chloride content by weight has not been included.

The value of potash exported from Belarus to the European Union amounted to €447-789mn in the last two years – an average of 15% of Belarusian imports to the EU, RBC calculated. The export of potash fertilisers that escaped these restrictions under the new sanctions was €140-190mn, RBC estimates.

Part of the reason that the 40%-62% potash sanctions were removed is because Russia is also a major exporter of this class of potash. Last year Russia exported €196mn worth of potash in this class and only €27mn of the remaining classes. Russia’s Uralkali has been a major rival to Belaruskali, the main potash producer, and would simply step into the Belarusian producer's shoes if its main export product was sanctioned.

Of the other fertilisers under sanction the most important is the complex (NPK) fertilisers containing nitrogen, phosphorus and potassium chloride. Their export from Belarus to the EU in 2020 amounted to €102mn. NPK fertilizers are exported from Belarus by Belaruskali and the Gomel Chemical Plant.

In all the EU Council named five codes of the commodity nomenclature banned for delivery from Belarus for potash fertilisers and five codes for petroleum products (including distillates, petroleum gases, paraffin, petroleum bitumen).

Belarus is expected to reroute the sanctioned potash to customers outside the EU via Russian and Ukrainian ports, which will add to transport costs, but these only make up 10% of the price of potash and will not have a major impact on the business, say analysts with VTB Capital (VTBC). China and India are also both major consumers of potash.

The sanctions impact on the port of Klaipeda will not be major and will likely be compensated by growth elsewhere, the port said in a statement cited by Reuters.

Raising the cost for Moscow

Landsbergis said that the goal of the sanctions is to persuade Minsk to change its ways and the EU wants to keep some of the toughest measures in reserve to have something to hold over Minsk for the future. On top of that, the EU is looking to exert pressure on Moscow by making it entirely responsible for financing Minsk and driving up the cost of doing so to intolerable levels.

“The secondary effect of the sanctions is that the losses of the Belarusian regime have to be refinanced, and only Russia can do that. Thus imposing sanctions, the EU and Lithuania are shifting a part of them on Russia, which can affect Belarus,” Landsbergis said.

Another area that remains unclear is what restrictions are being placed on Belarus’ bonds. According to reports, both primary issue of new Eurobonds and secondary market trading in new issues will be prohibited; however, it has been reported that existing Eurobonds will not be sanctioned for the meantime.

That would in effect prevent Belarus from raising fresh capital on the international debt markets or refinance existing Eurobonds, but would not cause the collapse in value of the some $3bn of outstanding Eurobonds for existing investors, many of them Western institutions.

If confirmed, the reported fixed income restrictions would make cash-strapped Belarus entirely dependent on Russia to refinance all of its existing debt and fund the country’s borrowing going forward.

Currently Moscow's support of Lukashenko has cost an estimated $2bn-$3bn in funding; however, the new sanctions will increase the cost to Moscow to somewhere between $6bn and $10bn, according to various estimates – a price the opposition is hoping will be more than the Kremlin is willing to pay and so it will replace Lukashenko sooner rather than later.

The plan may be working already. Lukashenko has clearly been unnerved by the measures and in what many see as a gesture to try to ameliorate the ire of the EU both Protasevich and his partner Sofia Sapega were released from jail and placed under house arrest on June 26 in Minsk.

On June 21, foreign ministers of the EU countries decided to expand the blacklist against individuals and entities of Belarus by 78 people and 8 companies. They also agreed to impose sectorial sanctions. The restrictions will affect the oil and potash industry, as well as the banking sector. They were supposed to be approved on June 24-25.

photo copyright Homoatrox, via wiki commons. This photo has been cropped to fit and published under a creative commons licence.