Erdogan signals Turkey’s elections will take place on May 14 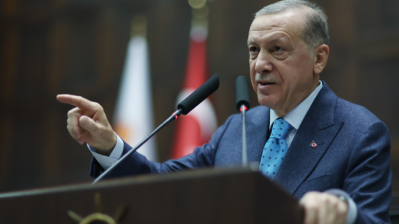 President Recep Tayyip Erdogan on January 18 signalled that Turkey’s parliamentary and presidential elections will take place on Sunday May 14, a month earlier than he had earlier indicated.

An address seemingly giving away the date was made by Erdogan to lawmakers of his ruling Islamist-oriented Justice and Development Party (AKP) on the same day that jailed Kurdish leader Selahattin Demirtas said an attempt by the state to ban his leftist party was part of the Turkish leader’s plans to foment "chaos" in Turkey's opposition ahead of the polls. Demirtas, in comments to Reuters from Edirne jail in northwest Turkey, warned Erdogan that the move would not save him from defeat after two decades in power. Demirtas also urged Turkey’s main opposition bloc, which is yet to name its challenger to Erdogan, to cooperate with his party, the pro-Kurdish Peoples' Democratic Party (HDP), to win the elections.

The opposition alliance has promised to roll back Erdogan’s unorthodox economic policies, which, in the eyes of critics, amount to economic mismanagement that has caused huge inflation rates and a collapse in the value of the Turkish lira, wrecking the livelihoods of countless Turks. It has also pledged to restore human rights of Turkish citizens that Erdogan has been accused of stripping away during his two decades at the helm.

In his address to AKP lawmakers, Erdogan said Turks would reject the opposition at the ballot box on the same date that elections were held in Turkey in 1950.

"Our nation will say 'enough' to these coup appreciators, this ambitious but incompetent Table of Six, on the same day after 73 years," Erdogan remarked of the six-party alliance looking to turf him out of office, as reported by Reuters.

In the Turkish elections held on May 14 of 1950, the Democrat Party defeated the Republican People's Party (CHP), which had ruled Turkey for 27 years since it was formed. It is the CHP that is the largest party in the opposition alliance set to take on Erdogan.

Last year, Erdogan, who will turn 69 at the end of February, repeated the line that the vote would be held as scheduled on June 18. Earlier this month, however, he said the date may be brought forward.

The HDP, which in the last parliamentary elections, took around 12% of the vote, making it the third largest party in the legislature, is facing an attempt in a courtroom by a prosecutor to close the party for alleged links to Kurdish militants.

Demirtas—no longer the HDP leader but a hugely influential political figure from jail, where he has been since 2016—has accused Erdogan and his far right ruling coalition ally, Devlet Bahceli, leader of the Nationalist Movement Party (MHP), of being behind the legal bid to close down the HDP.

"The aim of these two is to win the election by creating a vacuum and chaos in the opposition, weakening the HDP before the election," Demirtas said in written responses to questions from Reuters conveyed to him via the HDP. The timing of the case for closure was a "conscious political choice", he added.

Erdogan officials refute Demirtas’ claims, saying Turkey's courts are independent and that there is no political interference.

In December, Istanbul’s CHP mayor, Ekrem Imamoglu—whom polls have shown would likely defeat Erdogan in a presidential contest—was convicted and sentenced to more than two-and-a-half years in prison for insulting public officials with the word “fools”. The sentence comes with a concurrent ban on engaging in political activities, but, with Imamoglu appealing against the conviction, the ban would have to be confirmed by an appeals court to disqualify him from taking part in the elections.

The European Court of Human Rights (ECHR) three years ago ruled that Turkey must immediately release Demirtas, concluding that his imprisonment was cover for limiting pluralism and debate. Turkey has not complied.

A court recently voted to freeze the HDP's bank accounts, while considering allegations that the party has ties to the outlawed Kurdistan Workers’ Party (PKK) militant group. The HDP denies any such connections.

Demirtas was previously sentenced to three years in prison for insulting the president. He is now being kept in prison in relation to an ongoing trial in which he and more than 100 other HDP politicians are accused of orchestrating 2014 protests in which dozens died. All the defendants deny the charges.

"Even if Erdogan puts pressure on voters, even if he tries to use tricks, he cannot avoid defeat," Demirtas was further quoted as saying. "A large majority of people have lost their trust and belief in Erdogan, and it is impossible for him to regain it."

The HDP presently plans to nominate its own candidate to bid for president, but Demirtas has not ruled out backing a joint opposition candidate.