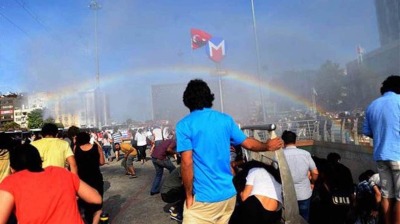 Erdogan's police may accidentally create rainbows with their water canons while they are attacking to the Istanbul Pride. Photo was taken in 2015.
By Akin Nazli in Belgrade July 2, 2019

The governor of Istanbul refused to allowed an Istanbul Pride march again this year as it has done every year since the first pride march was held in 2014 following the Gezi popular protests the previous summer.

LGBT activist defied the police ban and entered Istanbul’s historic Istiklal Avenue in the centre of Taksim district. The Istanbul Pride Week Committee has read out a press statement to the crowd and journalists on one of the side roads connecting to Istiklal calling for tolerance and the right to publicly demonstrate, bianet reported.

In what is more of a party than a political statement in most other capitals turned into a protests after Turkish President Recep Tayyip Erdogan’s riot police attacked the crowd, firing rubber bullets and teargases after the pride committee had read its statement.

Istanbul’s newly-elected mayor Ekrem Imamoglu was not to be seen and remained silent about the Istanbul Pride. He has not commented on the issue not has the municipality issued any statement, although Reuters reported that he voiced support for the LGBT march in a meeting with foreign media on June 28.

Imamoglu said he would ask the governor why the march had been banned so far, according to Reuters.

However, many CHP municipalities, including Istanbul’s districts, voiced support for gay prides via their social media accounts.

Gay prides are also banned in other cities of Turkey, including Ankara and Izmir.

Populist Erdogan has not expressed ethical or religious objections to the pride marches, but opposes them on political grounds as the Istanbul LGBTI+ community are strongly opposed to Erdogan.

In contrast Erdogan has no problem with the gay movement inside his own party, a groups called AK LGBTI+ that support his ruling Justice and Development Party (AKP).

“The police thought we were Gezi Park activists and mistreated us. Some people mistook our flag for the flag of the [Kurdish Workers’ Party, or PKK]. After we explained who we were, there were only chuckles. In the meantime, however, we met fellow LGBT individuals when they saw us there. We waved our flag right before Erdogan’s eyes. He saw the flag, but said nothing and only smiled. We take it as a positive sign that he said nothing. Thus, we will now keep up the struggle. One of our main projects is to save conservative homosexuals from the environs of ill-minded LGBT people,” one of the AK LGBTI+ members said back in 2014 when they raised a LGBTI+ flag at an Erdogan rally for the first time in 2014.

Prior to 2014, Istanbul Pride had been the largest one in the region and it had been held each year without interruption from 2003 to 2013.

However, as Erdogan began to tighten his grip on the political process and became increasingly authoritarian following the 2008 global crisis, the Istanbul Pride metamorphosed into protest aimed specifically at Erdogan and the authorities tolerance of the event evaporated.

Istanbul’s LGBTI+ community was a leading contributor to the Gezi popular protests in 2013 and Istanbul Pride has been banned ever since, together with any other kind of protests in the country.

Following the failed coup d’état attempt in July 2016 the crack down on public dissent has become even stricter. Erdogan’s riot police has violently attacked anyone who attempts any kind of demonstration, even individual protests or those that just voicing discomfort.

The management of Istanbul University did not allow a group of students  to attend the graduation march with a blank poster, claiming that students could later write anything they liked on the poster using Photoshop, local daily Birgun reported on June 12.
Read in IntelliNews Pro
Get IntelliNews Pro

DON: Blunting the Javelin? – The prospects for Nato participation in a Ukraine-Russia war

What will Nato offer to Ukraine? Probably a Javelin missile resupply