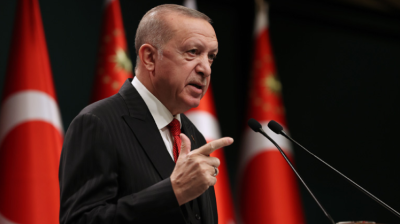 Erdogan on November 30 announcing tighter lockdown restrictions in the face of Turkey's mounting coronavirus outbreak, now recognised as one of the most dire in the world.
By bne IntelIiNews December 2, 2020

“Denying any connection between his government’s policy and Turkey’s economic collapse, the president’s rudimentary understanding of basic economic principles has bordered on the absurd,’’ Jesner said.

In early November, Erdogan changed his economic team—firing the central bank governor and accepting the resignation of his son-in-law finance minister Berat Albayrak—as the Turkish lira threatened to slip into a second full-blown currency crisis within two years and it became clear that the central bank had burnt through most of Turkey’s FX reserves in a failed attempt at defending the currency. But Jesner said it would take more than an economic reform package or a shakeup of the country’s top economy cadres to deliver an economic recovery.

Erdogan said his administration would swallow a “bitter pill” if that’s what it took to bring in polices to right the economy and he also promised some judicial reforms. Jesner said such pledges should not inspire hope for the country’s future.

“Erdogan’s policies have time and time again exhibited: economic manipulation; wide scale jailing of journalists critical to Erdogan’s policies; and the purging of so-called dissenters from the civil service, academia, and the justice system,’’ the analyst wrote, saying the Turkish economy needed a long journey of recovery with coherent non-conspiratorial economic policy.

Jesner also called attention to how Erdogan’s foreign policy adventurism has tarnished relations with Turkey’s leading trading partner, the European Union, and had to be quelled. In 2019, Turkey-EU trade stood at €138.1bn, making Turkey the bloc’s sixth largest trading partner with the trade share at 3.4%.

Separately, German Social Democrat MEP Udo Bullmann told EURACTIV in a November 30 interview that observers “shouldn’t forget that the power base of [Erdogan] is shrinking … look at the results of the last municipal elections [in spring 2019]: the guy is sweating, the guy is afraid of losing his definition power of internal and external politics within Turkey”.

Bullmann added that Germany would aim to keep a communication channel open with Turkey as its strengthening political opposition was advocating good relations with the EU.

“We should not deal with Turkey as an autocratic monolith, so keep the flexibility to transform and bring Turkey back into the family of peaceful nations,” the EU lawmaker said.

The EU should send a clear message to Erdogan that his aggressive behaviour cannot be tolerated any longer at its upcoming leaders’ summit on December 10-11, Bullmann said.

Numan Kurtulmus, deputy chair of the AKP, last week said high unemployment and current account deficits would be solved as part of the new economic approach but that it would take time

Some analysts say the risks of an early election in Turkey have risen along with prospects of economic sanctions, given ongoing rows with the European Union over territorial waters for gas exploration and expectations of tougher US bilateral ties under a Joe Biden White House. Biden late last year referred to Erdogan as an “autocrat” and said the Turkish opposition should be encouraged to take him on.

"The public closely follows the ongoing political conflict in Ankara, and senses that the end might be an early election or a costly conflict with the West," Atilla Yesilada, an analyst at GlobalSource Partners, was quoted as saying by Reuters on December 1.