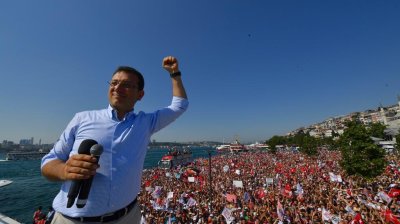 Imamoglu, seen to have made a telling breakthrough as an antidote to populism, has achieved a stunning victory.
By Akin Nazli in Belgrade June 23, 2019

The June 23 Istanbul revote has delivered an earthquake in Turkish politics—Ekrem Imamoglu, candidate for the main opposition party, has recorded a stunning victory over the candidate backed by President Recep Tayyip Erdogan, Binali Yildirim. Yildirim has conceded defeat.

The initial reaction from Erdogan saw him cancel a press conference but congratulate Imamoglu with a tweet, using his name for the first time in a month (lately he ordered his party's officials to describe him as "CHP's candidate"). In further tweets, indicating he was set to try and take a business-as-usual approach despite a strategic move that has blown up in his face, he said Turkey is focused on its 2020 Centenary of the Republic targets and added that he would attend the G20 summit and visit China at the end of the month.

The revote was called by Turkey’s election watchdog after the original election, held during the country’s March 31 polls, produced a narrow victory for the secular Republican People's Party (CHP) candidate Imamoglu by 48.8% to 48.6% (with an official margin of around 13,000 votes). The result was disputed by Yildirim, Erdogan and their populist Justice and Development Party (AKP) on the basis of claimed “irregularities”.​ 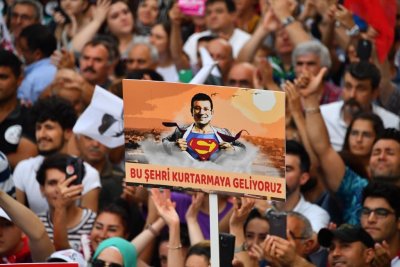 Jubilant backers of Imamoglu are not about to under-rate their man.

The AKP and predecessor fellow Islamist-rooted parties ruled Istanbul for more than 25 years until the local elections.

The decision to call a revote was widely criticised abroad with, for instance, Turkey’s largest trading partner Germany saying there was absolutely no justification for it. But Erdogan was stung and embarrassed by the first vote as, with the debt-fuelled economy mired in dire trouble and Turkey’s human rights record coming in for more and more stinging criticism following nationwide crackdowns on Erdogan’s opponents, it was seen as a referendum on his 17-year-long rule. The revote too is seen as such a referendum as well as a test of what remains of Turkey's democracy.

How strongman Erdogan reacts to this even worse humiliation, the biggest setback in his political career and a possible watershed moment for Turkey, is all-important. The Istanbul defeat could come to be seen as the beginning of the end for the pugnacious Turkish leader, who rose to prominence in politics as mayor of Istanbul in the mid-1990s and once said: "Whoever wins Istanbul, wins Turkey".

Snap elections speculation
There is speculation in Turkey that the massive setback of losing Istanbul could prompt Erdogan to call snap elections in a bid to reassert control over his party and ruling coalition backed by the ultra-nationalist MHP, both of which have shown increasing evidence of factional infighting among the growing economic and political pressures.

The BBC reported Imamoglu as saying in a victory speech that the result marked a "new beginning" for the city, Turkey's business and cultural capital and behind around a third of the country's GDP.

"We are opening up a new page in Istanbul," Imamoglu, 49, said. "On this new page, there will be justice, equality, love. We will stop the arrogance and waste. Today 16 million Istanbullus have refreshed our belief in democracy. I thank them all from my heart. You have shown the world that Turkey still protects its democracy. And we have shown other countries who try to go down the road we were choosing that it is no road at all."
Imamoglu was also cited as saying: "Mr President [Erdogan], I am ready to work in harmony with you."
​ 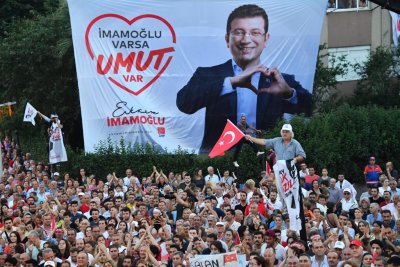 Imamoglu met smears with smiles in his 'radical love' campaign against the AKP populists.

Prior to voting, Imamoglu told reporters: “Today our people will make the best decision … for the sake of our democracy, for Istanbul and also for the legitimacy of all future elections.”

Imamoglu, mayor of Istanbul's Beylikduzu district, has won plaudits for responding to angry populist rhetoric by urging his supporters to extend the hand to their opponents as part of a campaign of "radical love" despite their differences. Some commentators even speculate he could be a future president of Turkey. There is some prospect of those who would seek to dislodge Erdogan getting a chance in early elections, but as things stand no polls are scheduled to take place until 2023.

In conceding defeat, Yildirim, Turkey's prime minister until the post was abolished in favour of making Erdogan executive president in July last year as Turkey switched from parliamentary democracy to presidential democracy, told supporters: "I congratulate him [Imamoglu] and wish him good luck."

Yildirim, who was PM for two years, was elected Speaker of the new parliament in February. Before that he served as minister of transportation and communication. He is one of the founders of the AKP.

In the local elections at the end of March, the AKP also lost control of Ankara and several other key Turkish cities. But Istanbul, the most influential part of the government's unofficial network of patronage, is the most serious loss for the party formed in 2001.

Journalist and writer Murat Yetkin told Reuters earlier on June 23 before voting was under way in earnest: "If İmamoglu wins again, there’s going to be a chain of serious changes in Turkish politics."

"It will be interpreted as the beginning of a decline for AKP and for Erdogan as well,” he added, noting that the president himself had called the local elections “a matter of survival [for Turkey]".