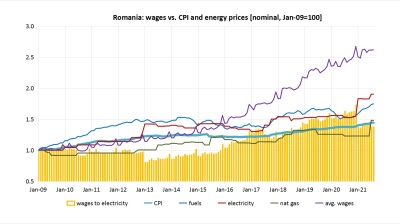 Just like during the previous inflationary episode in 2018, the headline inflation is again being pushed up by rising energy prices.

As of August 2021, over half of the 5.3% y/y annual inflation (namely 3pp) was caused by higher prices of fuels (1.2pp), electricity (1.1pp) and natural gas (0.6pp). Just like any other short-term indicator, headline inflation was impacted by the lockdown last year, which pushed the energy prices down, particularly the fuel price.

Prior to the inflation peak in 2018, the central bank had hiked the refinancing rate in just over half a year from 1.75% to 2.5% to address the cyclical expansionary fiscal policy.

This time, however, the inflation hits at a different phase of the economic cycle and the monetary authority had cut the policy rate from 2% to 1.25% over the past year in order to help the recovery and mitigate liquidity issues during the crisis. The central bank has so far used liquidity instruments in order to prepare for addressing second-round effects of the energy prices but it will have to turn more hawkish eventually.

The government deferring the fiscal consolidation will facilitate the central bank’s expected rate hike decision although the global slowdown caused by the fourth wave of the pandemic is still a relevant factor. At this moment, bank analysts expect a 25bp rate hike in November but no change in October.

As regards the social impact of the energy price increase, over the past three years since 2018 wages have increased by nearly one third (+31% as of July 2021 versus July 2018). Employment increased marginally.

In other words, even after the sudden increase in the price of electricity (+18% in January) and natural gas (+20% in June), households should spend (on average) a smaller share of their incomes on utilities. However, wide income discrepancies in Romania raise questions about this conclusion and the fact that half of the households use firewood (its price rose much more) poses even more questions as regards energy poverty in rural areas.