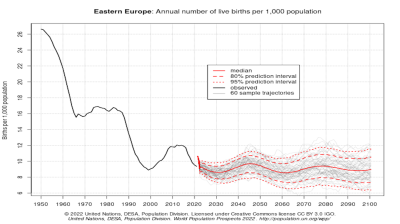 The UN projects no revival in the number of live births per 1,000 population in Eastern Europe. / UN
By bne IntelliNews August 17, 2022

Governments in several counties across Emerging Europe have launched pro-natal policies where parents receive financial benefits and tax breaks for having more babies.

Such policies – introduced in countries from Russia to Poland to Serbia in recent years – are intended to fight the overwhelming trend of demographic decline in the region, where populations of many countries are forecast to drop to levels not seen since the early 20th century in the coming decades.

UN data shows that the total population of the post-socialist countries in Central, Southeast and Eastern Europe, the South Caucasus and Central Asia will drop from 418mn in 2021 to an anticipated 362mn by the end of the century, according to the median projection in the World Population Prospects 2022 report.

Taking out the countries of Central Asia – the only region where countries have rapidly growing populations – the slump is even deeper, from 339mn to 231mn, or a decline of 32%, according to bne IntelliNews calculations.

This continues a broad trend seen since the collapse of communism, when a sharp decline in birthrates and a fall in life expectancy in the early transition years was combined with large-scale emigration.

Data for the UN's Eastern Europe region (comprising Belarus, Bulgaria, Czechia, Hungary, Moldova, Poland, Romania, Russia, Slovakia and Ukraine) shows births per 1,000 of the population are expected to range between eight and 10 for the rest of this century, well below the number of deaths.

Fertility is set to overtake that in Western Europe over the coming decade, but will remain relatively low until 2100. Meanwhile, global fertility will gradually decline until the end of the century but remain above that in Eastern and Western Europe.

Projections for birth and death rates and fertility in Eastern Europe. Source: UN.

Russia took decisive steps to tackle the country’s demographic catastrophe the mid-2000s. As bne IntelliNews reported in the feature “Putin’s babies”, when he came to power Russian President Vladimir Putin put dealing with Russia’s demographic crisis at the top of his agenda.

The Mother and Child programme brought in a wide range of subsidies and financial incentives, including higher child benefit, longer maternity leave and subsidies for mothers who chose not to return to work. This had almost immediate results; the Kremlin reversed the demographic decline and stabilised the population size. However, more recently as the demographic dent caused by the chaos of the collapse of the Soviet Union in the 1990s hits the curve, the population has started to fall again.

Now the decline in the size of Russia’s population is accelerating, driven by a combination of the arrival of that demographic dip and one of the lowest fertility rates in the world. At the same time, efforts to tackle the problem are continuing. The current programme aims to reduce infant mortality to 0.45% by 2024. Families with at least three children will receive free land equipped with the technical infrastructure needed for housing.

Projections for population and fertility in Russia. Source: UN.

More recently, other governments in Central and Southeast Europe have launched their own incentive programmes in attempts to address population decline.

In June 2021, Poland revealed its strategy to stop depopulation. The aim is to boost the number of births so that it reaches a level close to the generation replacement rate by 2040, Prime Minister Mateusz Morawiecki said at the time.

That is a considerable challenge, as Poland’s fertility rate is just 1.41, well below the generational replacement rate of 2.1 births per woman, and one of the lowest fertility rates in the EU.

“If we do not strengthen the state’s support for families then in a decade or two the pension systems will collapse, economic growth will slow down and Poles simply will not be able to fulfil their ambitions and aspirations here in Poland,” Morawiecki told a news conference at which he unveiled the government’s Demographics Strategy.

Under the strategy Warsaw is continuing payouts to families, such as the flagship 500+ programme of paying PLN500 (€110) monthly per child in a family, alongside additional welfare programmes including a payment of PLN12,000 during the first two years of a child’s life.

The government also wants to ease the workload for pregnant women and mothers of children up to four years of age and protect them from layoffs. Fathers of babies up to one year will also be protected against dismissal from work. Other policies like more accessible mortgages will also help Poland’s demographics, the government hopes.

The programme was launched four years after Poland’s health ministry released a video with the message ‘breed like rabbits’ on YouTube.

In Hungary, generous state grants and loans to families helped to lift the fertility rate from 1.2% in 2010 to around 1.5% in 2020, but fertility rates remain one of the lowest in Europe.

In both Poland and Hungary, encouraging the local populations to have more babies fits neatly with the right-wing agendas of their governments.

Hungary’s government has long advocated a "procreation over immigration" approach to deal with demographic decline. Prime Minister Viktor Orban has repeatedly said that family support programmes are his government's answers to migration.

Alongside encouraging women to have more babies, Poland’s right-wing government has introduced a near-total ban on abortion, intended to please the powerful Catholic church and the most conservative portion of the electorate. This sparked thousands-strong protests in the country.

Projections for fertility in Poland and Hungary. Source: UN. ​

Elsewhere in the region, Serbia’s government announced in February it will offer subsidies of up to €20,000 to new parents to help them buy their first home in an attempt to boost the birth rate.

The policy measure “is extremely important for increasing the birth rate and improving the demographic picture, as one of the strategic goals of the Serbian government”, a government statement said.

That comes on top of the incentive payment of RSD300,000 (€2,551) for each parent for each first-born child that came into force from January 1.

“Having in mind the fact that we are slowly disappearing as a nation, that there are fewer and fewer of us, that the birth rate is only slightly higher than 1.5 and for simple reproduction we need 2.15, that is a very big problem,” President Aleksandar Vucic said when he announced the measure.

In the first half of this year, the number of deaths in Serbia was more than twice as high as the number of live births. By the end of the century, Serbia is forecast by the UN to have one of the three fastest-declining populations across Emerging Europe.

Projections for population and fertility in Serbia. Source: UN.