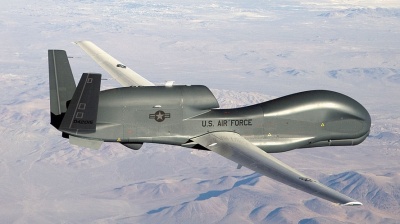 A US Air Force An RQ-4 Global Hawk surveillance drone similar to one downed by Iran in 2019. / U.S. Air Force photo by Bobbi Zapka, public domain
By bne IntelIiNews February 23, 2022

While the combat drone successes of countries such as Turkey and Iran have made many headlines in recent years, it could be electronic warfare (EW) technologies developed to counter uncrewed aerial systems that will grab the limelight in years ahead.
The issue is explored by the Army Technology site, which notes how autonomous and remotely-operated vehicles are heavily reliant on electronic communications and systems.

“As the number of tasks transferred to uncrewed systems increases, the need for the advancement of counter-uncrewed aerial systems (UAS) and electronic warfare (EW) solutions to combat them also rises,” the journal notes.

Turkey is second in the world in terms of the number of drone strikes it carries out, behind only the US, and it is the largest manufacturer of unmanned aerial vehicles (UAVs). Its use of drones—combined with the KORAL system EW capabilities produced by Turkish defence manufacturer Aselsan that shield the drones by jamming and deceiving conventional and complex types of hostile radar—have prompted many discussions on the changing nature of the battlefield.

“In other counter-UAV exercises, Russia deployed the Silok-01 R-934BMV automated jamming station and the Pole-21 advanced radio suppression system. Both of these capabilities can detect and render UAS useless by tapping into their communications and suppressing their control channels.”

Nato, the journal observes, began trialling the UK-produced Sensing for Asset Protection with Integrated Electronic Networked Technology (SAPIENT) counter-drone solution at the beginning of 2022. It was developed by the Defence Science and Technology Laboratory (Dstl) and support agency Innovate UK.

The NGJ-MB programme is currently in the production and deployment phase after successfully completing Milestone C for the US Navy. The jammer system is set to be used on the EA-18G Growler aircraft by 2022, according to Army Technology.

Academic sheds light on Rahmon regime’s attempts to crush the Pamiris
COMMENT: Does Russia have any friends left in Southeast Asia?
bneGREEN: Zero-carbon housing a key battleground for climate change

Business Insider: Western tech majors have tested or used controversial Russian face recognition technology
4 days ago
From 4G to 6G: How Russia seeks to develop mobile networks amid shortages of domestic frequency and foreign equipment
4 days ago
Should I stay or go for founder of Russian internet major Yandex
8 days ago
EVs in Uzbekistan bring problems and prospects
11 days ago
Poland-based Deepflare bags €1.5mn to fast-track mRNA vaccine development with AI
13 days ago