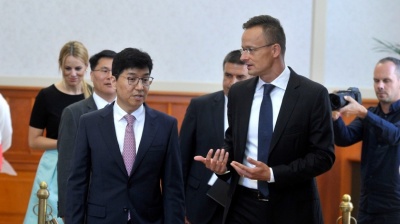 "This is the first year in the history of the investment promotion system in which the most investment didn’t come from Germany, but from South Korea," said Minister of Foreign Affairs and Trade Peter Szijjarto said on Wednesday after Bumchun Precision announced it will build a HUF13.3bn plant supplying parts for electric cars in Salgotarjan, north Hungary.

This will be the company's first plant outside of South Korea. The government will provide HUF2.65bn grant for the green-field investment which will create 200 jobs,

The South Korean company was founded in 1982, and in addition to producing and developing parts for electronic equipment and mobile phones, a few years ago it also became involved in the manufacturing of batteries for electric vehicles.

On Tuesday, South Korea's Doosan broke ground for a HUF31bn copper foil plant in Tatabanya, northwest Hungary, 56km from Budapest. The government provided a HUF4.7bn subsidy for the project.

The plant, which is expected to be completed by early next year, will turn out 50,000 tonnes of copper foil a year when it reaches full capacity, enough to make batteries for some 2.2mn electric vehicles.

The location of the plant enables the capacity of the plant to be doubled later to produce 100,000 tons annually. The investment could make Doosan the primary supplier to the European market. Demand for the copper foil used in electric vehicles is continuously increasing, with market demand currently standing at 75,000 tons, which could grow to 975,000 tons by 2025, Szijjarto quoted figures from market tracker SNE Research.

Doosan chose the Hungarian site for its proximity to major EU markets as the risk of oxidation of the copper foil en route from a remote location is higher.

Hungary is making huge efforts to reduce its independence on the traditional vehicle sector and position the industry for the new era of electric car productions.

So far four South Korean e-car battery makers choose Hungary for their production sites.Inzi Controls was the latest to set up a production base, following the footsteps of SK Innovation, Samsung SDI and GS Yuasa.  These investments could make Hungary one of the largest EV car battery producers in Europe after 2020.

The emergence of Asian battery manufacturers in the region is not a coincidence, as European car manufacturers are planning to expand or replace their existing model portfolio with new fully electric or hybrid models. Previously, carmakers mostly purchased batteries from China and South Korea.