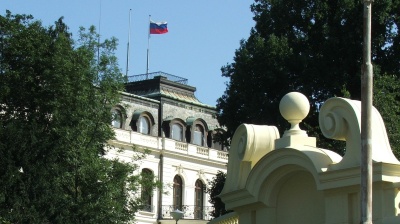 The Russian embassy in Prague is by far the largest in the country and has long been alleged to be full of intelligence agents.
By bne IntelliNews April 18, 2021

The explosion at the Vrbetice depot, in the Zlin Region, in October 2014, killed two people and resulted in the evacuation of nearby areas. The second explosion at a nearby depot later in December resulted in further evacuations, but no casualties.

At the time, the depot reportedly contained weapons that were to be sold to a Bulgarian arms dealer and supplied to Ukraine, to help it in its conflict with Russian-backed seperatist forces, the Czech News Agency reported. The explosion was probably not meant to take place in the Czech Republic, but during its transport to another country, the agency said. According to the Respekt.cz magazine website, in 2015 the Bulgarian arms dealer involved, Emilian Gebrev, was later the victim of an attempted poisoning similar to the 2018 attack in Salisbury in the UK.

Other reports say that the arms were destined for Syria, to be used by forces opposed to President Bashar al-Assad, who is backed by Russia.

Hamacek has cancelled his planned trip to Moscow to negotiate to procure the Russian anti-coronavirus vaccine Sputnik V. Industry Minister Karel Havlicek also said that Russian nuclear power company Rosatom would be thrown out of the planned tender to build a new nuclear reactor unit at the Dukovany power station.

Russia has denied any involvement in the explosions. On Sunday it expelled 20 Czech diplomats from Russia in retaliation.

Russia's embassy in Prague is by far the largest in the country and has long been alleged to be full of intelligence agents.

The Czech Republic has asked for help from its Western allies.

"We will keep our partners from the European Union and Nato informed and ask for their support," said Hamacek at the press conference.

Babis said he has already informed the President of the European Council, Charles Michel, on the issues and he “will keep [Czech] partners in detail at the next European Council”, he said.

"We are in a similar situation as, for example, the United Kingdom in the case of an attempted poisoning in Salisbury in 2018," Hamacek said, referring to the poisoning of former Russian secret agent Sergei Skripal and his daughter Yulia. Two Russian nationals wanted in connection with the explosions were using the same names as the alleged Salisbury assassins.

Britain’s foreign secretary Dominic Raab has already expressed the UK´s full support to its Czech allies. “We are as determined and committed as ever to bring those responsible for the attack in Salisbury to justice, and commend the actions of the Czech authorities to do the same. Russia must desist from these actions, which violate the most basic international norms,” Raab said.

Babis said there was unequivocal suspicion of Russian involvement.

“There is reasonable suspicion of the involvement of officers of the Russian intelligence service GRU in the explosions of ammunition depots in Vrbetice. I appreciate the work of our security forces, the police and, in particular, [the National Centre against Organized Crime of the Criminal Police and Investigation Service, NCOC] in exposing this unprecedented scandalous event,” Zeman´s spokesperson in a neutral tone on Twitter, adding that the president's office will issue an official statement in a week.

According to former Chief of the General Staff of the Czech Army Jiri Sedivy, the alleged Russia action should be defined as a state terrorism. "We must strongly stand against this and protect our security. On our own or in cooperation with allies," said Pavel.

Sedivy stressed that Czechia should free itself from dependence on Russia, for example in the field of military technology, and, among other things, the government should exclude Russia from the tender for the completion of power plant Dukovany.

"This could be compared to a military invasion of our territory and a violation of our sovereignty. This is something we have not known for many years ... If this is true, this means that Russia really has no mechanisms other than violence. We have to react very resolutely to that,” Sedivy said, quoted by the Czech News Agency.

According to the NCOC, there is currently no reason to implement increased security measures in the Czech Republic. “We monitor the situation with our own operational resources using the channels of international police cooperation, including open source monitoring,” the police said on announced.

The police statement stated that the two wanted persons used at least two identities each, with Russian passports named Alexander Petrov and Ruslan Boshirov, the same names that were suspects in the Skripal poisoning, and with Moldovan and Tajikistan passports, Nicolai Popa and Ruslan Tabarov.

As reported by the Respekt.cz magazine site, both wanted men arrived in the country on October 13, 2014, and had booked to visit the ammunition depot in Vrbetice. However, the police do not yet have direct evidence that they actually physically entered the depot, but considers this to be highly probable.

"If they entered the complex, it was without the company's knowledge," a legal representative of the Imex Radek Ondrus told the iRozhlas.cz website.

"No-one with those names came to the company at that time. We were arranging permits for [two] persons, visitors from one of the foreign countries, not Russia …, however, in the end they did not come," he added.

According to the Seznam.Zpravy news site, the GRU targeted Vrbetice due to the fact that the weapons were allegedly headed to Syria, for the Americans fighting in Syria against President Bashar al-Assad, backed by Russia.

Lidovky.cz website reported that the explosion was probably set up for later and it was supposed to kill someone for whom the supply of weapons was intended.

The president's silence over the alleged Russian action has caused outrage among opposition parties.

“Is this how the head of state behaves? I would like to remind him that he is still the president of a sovereign state and not the Russian governorate," said the former chairman of the Christian Democrats, Marek Vyborny, quoted by news website iDnes.cz.

Petr Gazdik, Deputy Chairman of the Mayors and Independents, reacted in a similar way on Twitter. "Today, President Milos Zeman confirmed in his announced silence that his deeds are not the head of the Czech Republic, but an agent of an enemy power.”

"I would say that [Zeman] has already commented by this postponement of the immediate statement. The president has long promoted Russian interests in our territory. The constitutional lawsuit against the president has another issue [to be added],” said TOP09 leader Marketa Pekarova, referring to a planned referral to the Constitutional Court over the president's request to the Czech secret services. As reported by news website Novinky.cz, in November last year, Zeman demanded the list of Russian agents operating in Czechia from the Czech Security Information Service (BIS), as well as the list of operations of the Russian secret services on Czech territory.

According to Senator Jiri Drahos (a nominee of Christian Democrats, Mayors and Independents, TOP09), the president's request from last year now has a "freezing context".

The opposition considers the involvement of the GRU in Vrbetice explosions as Russian terrorism in the Czech Republic, and called on Babis to discuss the issue within the EU and Nato.

"The prime minister and the president should address [this issue] at the EU and Nato level with our partners. They should ask them to support our response to Russia, it is not only a terrorist act against the Czech Republic, but also an act against an EU and Nato member state!" wrote the chairman of the Chrisistan Democrats Marian Jurecka on Twitter.

According to STAN MEP Stanislav Polcak, this is a new act of Russian state terrorism in the Czech Republic, like [the Russian invasion of] 1968. Polcak will propose a resolution in the European Parliament condemning Russia's violent practices.

The chairman of the Pirate party Ivan Bartos considers the explosion in Vrbetice to be alarming and the government's first reaction as adequate. "I assume that further steps will follow. Pirate deputies demand the Chamber Security Committee meet," he wrote on Twitter.

The head of the Civic Democrats Petr Fiala also wants to address the matter in the Chamber of Deputies. "This is to be called nothing else but an act of hostility and state terrorism," said Fiala.