Czech unemployment drops to a two decade low of 2.7% in April 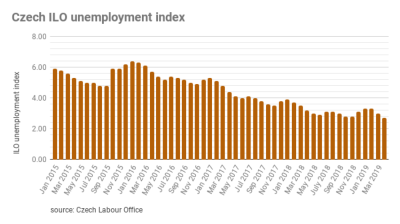 Czech unemployment rate dropped to 2.7% in April from 3% in March, at its lowest level since June 1997, due to the continuing start of seasonal work, according to data by the Labour Office published on May 10.

The analyst said it still has not reached its bottom. They expect unemployment rate to fall to 2.5% by the end of 1H19. After the summer they expect it will grow slightly, due to the graduates entering the labour market in July and August.

However, according to the Chief Economist of Generali Investments CEE Radomir Jac, the unemployment rate is very low in the domestic economy and there is no space for further decline,  iRozhlas.cz reported. The Akcent analyst Miroslav Novak said that creation of new jobs will stop this year but the unemployed rate will continue to be close to historical lows below 3%.

The number of jobless people amounted to 209,828 in April, down from 3.2% in April 2018. The number of vacancies increased to nearly 339,919. “Seasonal work is underway, particularly in construction, gastronomy and tourism, agriculture, horticulture, forestry, balneology and mining,” said the Labour Office Director Katerina Sadilkova, adding that in the coming months, the unemployment rate could fall slightly further.

Apart from Prague, where it stagnated at 1.9%, the unemployment rate went down in all regions in April, with Pardubice Region with the lowest figure at 1.8%. The highest rate was recorded in the Moravian-Silesian region with 4.4%.