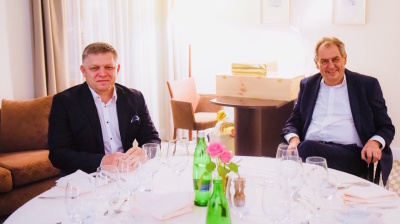 The meeting of Visegrad Group presidents on October 11 marked what is likely to be one of the last major diplomatic meetings of Czech President Milos Zeman before he leaves office in March after completing the maximum allowed two five-year terms.

The provocative populist Czech leader has barely travelled west during his 10 years in office, instead specialising in courting eastern dictators and neighbouring populist leaders.  This foreign policy was already in tatters after the belated exposure of Russia's involvement in the 2014 Vrbetice sabotage case, and the political shifts in the region amid Russia's invasion of Ukraine have rendered it even more irrelevant.

Zeman’s longstanding ties to Vladimir Putin were severely damaged after Russia invaded Ukraine, forcing Zeman to say “he was mistaken” about Putin amid the rise of overwhelmingly pro-Ukrainian sentiment in Czechia.

Zeman still says, however, that he is proud to be able to call China's Xi Jing Ping “his friend”, though there has been a backlash against his pro-China policy and the current centre-right government is keeping its distance from the Chinese dictator.

Zeman has also been a vocal promoter of the V4 format, which Hungarian strongman Viktor Orban had turned into a megaphone for his own radical rightwing policies, particularly over migration, damaging the Central European group's image in Brussels. Zeman  praised the V4 on October 11 for having “prevented efforts to distribute illegal migrants on the bases of quotas between individual [EU member] states”.

The Czech president also used the V4 press conference to lambast the EU's Green Deal, which according to him plays a role in the high energy prices in Europe. “Renewable resources must be backed by conventional sources” because of their alleged instability, Zeman said.

During the Bratislava press conference Zeman also called on Slovenia to join the V4 format. Slovenia has a new cabinet after Robert Golob’s centrist Freedom Movement swept far right populist Janez Jansa out of power in April and subsequently formed a coalition with social democrats and the progressive Left. Golob’s cabinet members have said they want to align Slovenia with the EU core of Brussels, Paris and Berlin, viewing the V4 as too toxic.

The V4 has become increasingly moribund since first Slovakia and then Czechia ousted their populist leaders in elections in 2020 and 2021 respectively, leaving it divided between centre-right and populist governments.

Following Russia's invasion of Ukraine in February this year,  Poland's radical rightwing government then fell out with Orban over his refusal to transfer military aid directly to Ukraine or to support tougher sanctions against Russian dictator Vladimir Putin.

Zeman also made use of his trip to Bratislava to meet populist ex-premier and Smer-SD party leader Robert Fico, as well as parliamentary speaker Boris Kollar, leader of the governing populist We are Family party, Zeman’s spokesperson Jiri Ovcacek informed on Twitter.

Fico has been a key face of the pro-Russian strand of Slovak politics, shaking hands with Putin after the Russian invasion of Ukraine, and inviting Russian Ambassador Igor Bratchikov to an August commemoration of the Slovak National Uprising, the WWII-era resistance struggle against the local fascist government backed by Nazi forces.

Last week, during the European Political Community (EPC) summit in Prague, Zeman also used the opportunity to hold separate meeting with two other authoritarians, Orban as well as Serbia's Aleksandar Vucic for whom Zeman has a particular appreciation. He awarded Vucic with the highest Czech award in 2021, and during a visit to Belgrade he told Vucic publicly that he “does not like Kosovo”.

According to the head of Castle diplomacy Rudolf Jindrak, the meetings were “partly about migration, where there is a problem now”, referring to the recent border controls halting the flow of people from the south of Europe to Germany.

Zeman also managed to create a scandal at the EPC summit by reportedly promising another unelected ruler, Qatar Emir Sheikh Tamin bin Hamad al-Thani, that he could attend the summit, when this had been ruled out by the EU. When he discovered this, the emir left the country in a hurry.

Czechia is one of the most energy dependent EU member states on Russia and is stepping up its efforts to diversify its energy sources ahead of the coming winter to fare without  Russian gas. Tamim was officially visiting Czechia to discuss investment cooperation, and as Prime Minister Petr Fiala told media after meeting the emir, besides investments “the Czech Republic is looking for reliable suppliers of LNG”.

Prague Castle pointed at Brussels for not agreeing with the emir’s participation, but local commentators were quick to argue that Zeman’s office had promised something that it had no right to.

While the cabinet of populist billionaire Andrej Babis was in power, Zeman not only had a freer hand to intervene in Czech foreign policy, but he was also able to in effect choose  the foreign minister.

Since the October 2021 general election Zeman no longer has the powerful informal role in Czech diplomacy that he had enjoyed under Babis’ cabinet, and Zeman was unable to veto Foreign Minister Jan Lipavsky.

Partly this is because the new government, unlike Babis', has a strong majority and is not dependent on the president's backing, brokering support from fringe parties. Partly, it also reflects the president's declining health.

Zeman suffers from a chronic medical condition, forcing him to use wheelchair, and last October he was set to be removed from office on medical grounds, but Fiala and his ODS party colleague and Senate leader Milos Vystrcil eventually did not go ahead with the move.

Zeman now looks likely to stay until the end of his term, but virtually all the controversial foreign policy goals that he pursued have now crashed and burned.