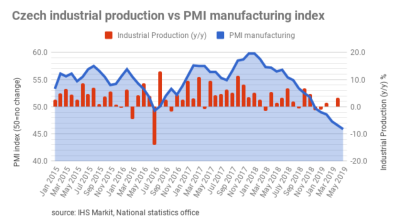 The Czech IHS Manufacturing Purchasing Managers Index plunged to its lowest level since July 2009, posting 45.9 in June, down from 46.6 in May and well below the 50 no-change mark, partly driven by a faster decline in production and the steepest decline in new orders since May 2009, according to IHS Markit report published on July 1.

As a consequence, Czech firms have reduced employment in the past four months. Concerns about the global trade development led to the lowest level of confidence indicators in last three years. According to Czech Statistics Office (CSO) data from May, confidence in Czech economy fell to its lowest level in the last three years, mostly due to concerns about the worsening international situation and a resumption of the trade war between the US and China.

“The Czech PMI suggests that domestic industry remains quite fragile. To a large extent, this follows developments abroad; Germany's manufacturing PMI fell below the key 50-level in January and has remained there ever since,” said the ING Chief Economist Jakub Seidler, adding that foreign leading indicators continue to confirm that the situation in industry remains challenging, not only in the Czech economy, but also e.g. Germany's PMI remained close to 45 in June.

Czech production recorded a further drop in June, due to weaker foreign and domestic client demand and unexpected shutdowns in automakers, its rate of contraction at the fastest level since December 2012.

"Czech manufacturers continued to signal weaker demand conditions in June. The deterioration in operating conditions gained momentum at the end of the second quarter, with output and new orders falling at faster rates. In particular, ongoing difficulties in the automotive sector led to a sharper drop in external demand,” said IHS Markit economist Sian Jones.

The input costs of producers and their output prices increased at a slower pace in June. The rate of inflation was the softest since June 2016. According to the CSO numbers, it accelerate to 2.9% year-on-year in May from 2.8% in April, driven by an increase in housing prices and the prices of food and non-alcoholic beverages.

Some firms managed to partly pass costs on to their customers, others suggested that greater pressure to discount affected their ability to raise charges. A drop in purchasing activity was the second-fastest since December 2012. “Lower purchasing activity allowed firms to renegotiate raw material costs, as pressure to discount charges in order to retain clients increased,” Jones said.

“Chinese industry indicators ... are sending similar signals: the official manufacturing PMI again fell below 50 points in June ... and the employment component reached 46.9 points, which is the lowest level since 2009. As such, despite the slightly optimistic G20 negotiations, it may take some time before the situation in European and domestic industry picks up,” Seidler stressed.

"Optimism towards the year ahead remained muted among goods producers, as global trade tensions and automotive weakness weighed on expectations. Although Czech industrial production growth is set to pick up through 2019, downward pressures from lacklustre external demand and labour market tightness are set to remain," Jones concluded.