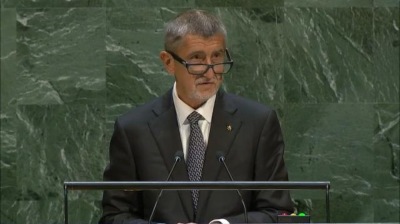 Babis also talked about migration as one of the main issues worldwide, stressed the importance of talks with Turkey and supported Erdogan’s plan for Syria, iDNES.cz reported on September 26.

According to Babis, the influx of migrants from conflict zones in the Middle East and Afghanistan was successfully mitigated by deepening cooperation with Turkey. However, he does not see the cooperation with Turkey as a systemic solution. Babis underpinned the need to improve lives in those areas as the long-term solution. Babis vowed Europe to “find a common language with President Erdogan,” adding that, “it is important to encourage him to pursue a concrete plan for refugees from Syria.”

The Czech PM personally supported Erdogan’s plan for a secure corridor in Syria, saying he thinks “we can improve the situation if we in the EU speak more with President Erdogan, while not forgetting we have to be able to speak to Syria.” After a bilateral meeting with Erdogan, address by Slovak leader Caputova a day earlier, in which she urged world leaders to fight climate change and respect international rules. Even though Babis announced he would not talk about the climate, he rewrote his address to the UN in reaction to Greta Thunberg’s fiery “how dare you” speech earlier this week that has caused a storm of reaction.

“I am not sure that emotional, hysterical, theatrical, and sometimes even aggressive speech leads to a rational discussion. And it is an unfair generalization that nobody is doing anything. It is not true. Many of us are doing what we promised in our commitments! And Greta Thunberg should differentiate. Otherwise, she is not being helpful,” said Babis.

Babis noted that the Czech Republic is one of a few signatories of the Paris climate agreement and that it is actually fulfilling its commitments. He also pointed out that “the European Union as a whole is ready to substantially change its economy to achieve carbon neutrality,” however, “Europe cannot remain alone as the most ambitious actor in its struggle to adapt its economies to the oncoming climate change. There is only one planet for all of us,” he stressed.

COMMENT: CEE Fintech Atlas: Some stagnation in the fintech scene, but new vibrant hotspots and opportunity to lift fintech partnership to the next level
Czech PM Babis earned "pocket money" of €3.4mn from Agrofert in 2019
InoBat Auto raises €10mn from CEZ for EV battery facility