Czech inflation rate up to 3% y/y in March 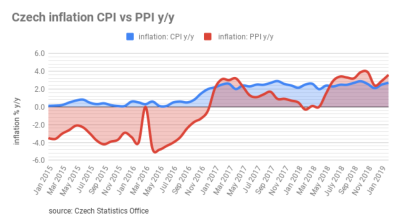 Czech inflation increased by 3.0% year-on-year in March from 2.7% in February, due to higher prices of housing, food, water, electricity, gas and other fuel, above market expectations of 2.9%, according to data by the Czech Statistics Office released on April 10. The inflation hit the upper-tolerance band of the Czech National Bank target, the highest level since October 2012.

“In general, the prices of services are mainly pushing inflation higher this year. Although they represent only 35% of the consumer basket, they are soaring this year. In January and February, they increased by 3.9% y/y, and just slightly decelerated to 3.7 % in March due to marginally weaker prices of package holidays which slowed down at the end of the winter season,” said ING Chief Economist Jakub Seidler.

Consumer prices went up by 0.2% month-on-month. Prices of electricity accelerated by 2.7% m/m and 11.9% y/y, prices of household appliances went up by 1.3% m/m, and prices from prices of fuels rose by 1.1% m/m in March after four months of decline.

“It seems very likely that March marked a peak for inflation this year. Inflation is likely to slow in the coming months when a high level of comparisons, particularly with last year's fuel price growth, starts to have an impact. In the remaining part of the year, we see inflation at around 2.5%,” said UniCredit Bank analyst Patrik Rozumbersky.

“We expect this pick-up to be temporary and prices should start to slow down after May. A central bank hike isn't completely off the table, but it all depends on external factors. … Though the Bank won't feel nervous as 3% inflation should only be short-lived, the inflationary outlook would justify another rate hike, especially as the koruna won't be appreciating as fast as the central bank expected,” Seidler said, adding that to see a hike in May, foreign risks need to calm in next weeks. This has been the primary reason behind the CNB´s decision to keep rate on hold.