CSTO comes out of the shadows for the first time 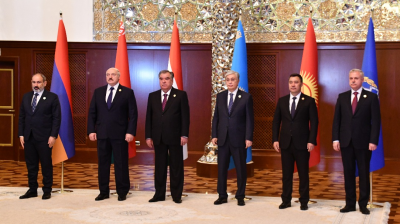 Soldiers from the Russian-dominated Collective Security Treaty Organisation (CSTO) are reported to have arrived in Kazakhstan to help defend President Kassym-Jomart Tokayev against violent protests that have shaken his authoritarian regime.

"Russia’s military units of the Airborne forces have joined the CSTO Collective Peacekeeping Forces. Currently, the aircraft of the Russian Aerospace Forces’ military and transport aviation are sending Russian units of the peacekeeping contingent to the Republic of Kazakhstan," a CSTO statement said.

The forces would be engaged in “the protection of important state and military facilities, assistance to the forces of law and order of the Republic of Kazakhstan in stabilising the situation and returning it to the legal order”.

Soldiers from the CSTO’s other members – Armenia, Belarus, Kazakhstan, Kyrgyzstan and Tajikistan – are also expected to take part. According to Armenian news reports, 70 soldiers will be sent.

There have already been reports that Russian special forces participated in an operation to retake control of the airport in Almaty that was briefly captured by the protesters on January 5.

As the rioting intensified on January 5, President Tokayev had appealed for military help "to help Kazakhstan overcome this terrorist threat".

For the first time in its 30-year history the CSTO immediately agreed to send “peacekeepers” and the next day troops had already begun arriving.

“In light of the threats to national security and sovereignty to the Republic of Kazakhstan, including from external interference,” the CSTO would send peacekeepers “for a limited period of time with the aim of stabilising and normalising the situation,” wrote Armenian Prime Minister Nikol Pashinyan, the CSTO’s current head, on Facebook. Pashinian added that there were "dangers threatening Kazakhstan's national security and sovereignty, which have arisen as a result of external intervention".

The CSTO is intervening under its Article 4 – a counterpart to Nato’s Article 5 on collective defence – which states: “If one of the States Parties is subjected to aggression by any state or group of states, then this will be considered as aggression against all States Parties to this Treaty. In the event of an act of aggression against any of the participating States, all other participating States will provide him with the necessary assistance, including military, and will also provide support at their disposal in exercising the right to collective defence in accordance with Article 51 of the UN Charter.”

Despite Tokayev’s accusations that he is confronting foreign-trained "terrorist gangs”, no credible evidence has so far been presented that Kazakhstan is facing an external threat by a “state or groups of states”, as mandated under Article 4.

Up until now the CSTO has had little to do. Since the founding treaty was signed on May 15, 1992, the most notable moves were the creation of a Collective Rapid Reaction Force (under a 2009 agreement) and peacekeeping forces (under a 2007 agreement).

Some 3,000 soldiers and 600 interior ministry personnel are assigned to the CSTO peacekeeping force. In October 2016, in CSTO also decided to establish a CSTO Crisis Response Centre in Yerevan, Armenia, which was entrusted with helping to organise any crisis response decisions taken by the organisation.

Ironically the first peacekeeping exercise – “Unbreakable Brotherhood 2012” – was actually held in Kazakhstan. "According to the scenario, a crisis situation arises connected with the activity of international extremists and terrorist organisations and conflict between ethnic groups living in the country," the CSTO said at the time.

CSTO units regularly hold joint exercises – their latest manoeuvres in October were conducted in Tajikistan, Uzbekistan and Kyrgyzstan in the wake of the takeover of Afghanistan by the Taliban – but never before has the CSTO agreed to send military forces and invoke Article 4.

In 2010 when Kyrgyzstan was experiencing huge ethnic unrest, and in Armenia in 2021, when it looked at one point as if Azerbaijan would not just retake its former territory but push into Armenia itself, the CSTO did not respond to requests for help.

In the case of Armenia, the CSTO sat on the request for three months and then dismissed the incursions as “in essence a border incident”. Eventually Armenia was persuaded not to make a formal request under Article 4.

In the current crisis, some analysts have questioned Russia’s ability to respond, as the troops that would normally travel to Central Asia from Russia’s Central Military District have largely been redeployed to the Western Military district near Ukraine.

However, at the moment large-scale deployments of troops are unlikely and Russia should be able to spare units such as the paratroopers that have been deployed. Russian media had reported that an aviation regiment in the city of Orenburg, close to the Kazakhstan border, was “on alert to be deployed to Kazakhstan”.

It is to be seen whether CSTO forces will play a frontline role in putting down the unrest, but even the fact that they have been deployed could damage the credibility of both the Tokayev regime and some of the states taking part in the CSTO mission. If the repression turns very bloody, this could rebound on their reputation both at home and abroad.

For Tokayev, the appeal for Russian help goes against long-standing Kazakh interests in trying to restrict Moscow’s influence inside the country, given its sizeable Russian minority and its history of Soviet domination.

There have also been reports that Tokayev discussed the crisis in a call with Belarusian President Alexander Lukashenko, another beleaguered dictator. Speculation that the presidents were discussing how to repress demonstrators and potential Belarusian assistance will further damage his credibility.

The CSTO intervention – compared by some outside observers to the Warsaw Pact repression of the 1968 Prague Spring in Czechoslovakia – could also rebound on the governments taking part.

Most obviously, Armenia, one of only two partly free states in the CSTO according to Freedom House, could be severely embarrassed. President Pashinyan is already facing criticism for authorising the military intervention in his new role as the rotating chairman of the CSTO. Ironically, Pashinyan came to power after Armenia’s own protest movement, and in its subsequent war with Azerbaijan, the CSTO refused to come to its aid.

Opposition leader Edmon Marukyan has poked fun at the president’s uncomfortable position by comparing the current crisis to Armenia’s request to the CSTO in 2020, which the organisation sat on for three months. This time around the CSTO, including Armenia, responded the same day. “I think we should wait for the written request according to the CSTO procedure,” Marukyan wrote sarcastically in a comment that has received thousands of likes.