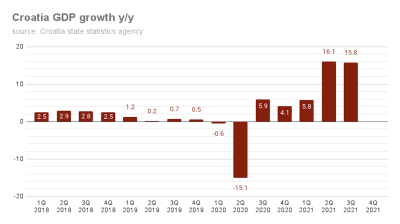 Croatia’s economy continued in the third quarter of 2021 the strong recovery that began in the previous three months, expanding by 15.8% compared to the same period a year ago, the Croatian Bureau of Statistics (DZS) said in a first estimate on November 26.

In the last year, the Croatian economy was badly hit by the coronavirus pandemic and lockdowns — which had a strongly negative impact on the country’s large tourism sector — but picked up in the second quarter of 2021.

Prime Minister Andrej Plenkovic commented that the data indicates that the country’s economy posting its strongest growth ever, following the deep recession in 2020 when GDP contracted by more than 8%. In the first nine months of 2021, the GDP expanded by 10.7% y/y.

“We have the biggest growth ever since Croatia exists. This shows a really fast, strong and explicitly high-quality, comprehensive recovery of the Croatian economy,” Plenkovic said in a statement.

Plenkovic also noted that this was the strongest growth among all EU member states that have reported theirs for the quarter so far, and is much better compared to the second-best country – Romania – where the Q3 economic growth was 8% y/y.

The y/y rise in economic activity was seen in all sectors except government spending in Q3. There was a 71.6% y/y hike in exports of services, which includes tourism services, while goods exports rose by 13.1%.

With double-digit headline inflation and accelerating core inflation readings, the National Bank of Poland is expected to keep on tightening monetary policy in the months to come.